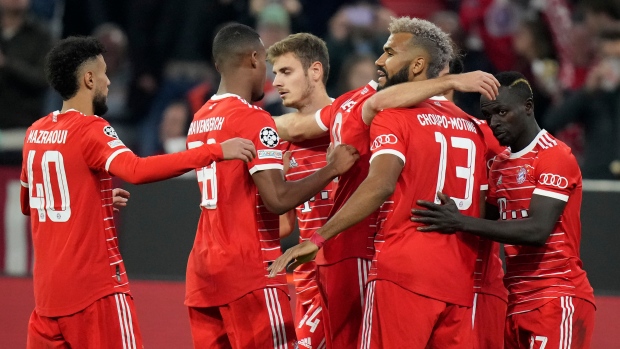 Bayern maintained its perfect start to this season's campaign to break Real Madrid's mark of 30 straight group-stage matches without a loss, a streak stretching back to September 2017.

Bayern also hasn’t lost at home in Europe’s premier competition since a 3-2 defeat to Manchester City in December 2013. Since then, the Bavarian powerhouse has won 25 games and drawn one in Munich.

Bayern recorded 2-0 victories over Inter Milan and Barcelona already in Group C, but it had to face Plzeň without Thomas Müller and Joshua Kimmich due to coronavirus infections.

Sané opened the scoring in the seventh minute when he coasted past several defenders before unleashing a shot inside the top left corner, and Leon Goretzka pushed the ball through for Serge Gnabry to make it 2-0 in the 13th.

Adam Vlkanova had just tried his luck for Plzeň, but Manuel Neuer safely gathered the shot. It was the visitors’ only real chance in the first half.

Sadio Mané turned on the style to flick the ball over a defender, then breezed past two more before firing in his first Champions League goal for Bayern in the 21st.

Jamal Musiala thought he had added the fourth in the 37th after a well-worked team move, but the goal was ruled out through VAR as Mané was adjudged to be just offside before playing the final pass.

Coach Julian Nagelsmann took off the impressive Musiala for Eric Maxim Choupo-Moting at the break, perhaps to rest the 19-year-old Germany international for Saturday’s Bundesliga “Klassiker” at Borussia Dortmund.

Sané displayed a good first touch to control Mané’s cross with the outside of his boot, then wasted no time in sending the ball with his next touch past the helpless Marián Tvrdoň in the Plzeň goal for Bayern’s fourth in the 50th. It was Sané’s 16th goal in his last 12 games in the competition.

The Germany winger had endured a difficult start at Bayern, with injuries hampering his impact amid high expectations since joining from City in 2020.

But the fans that once whistled him showed their appreciation Tuesday as Sané went off to thunderous applause in the 58th with Nagelsmann bringing on the 17-year-old Mathys Tel.

Choupo-Moting got the fifth goal a minute later.