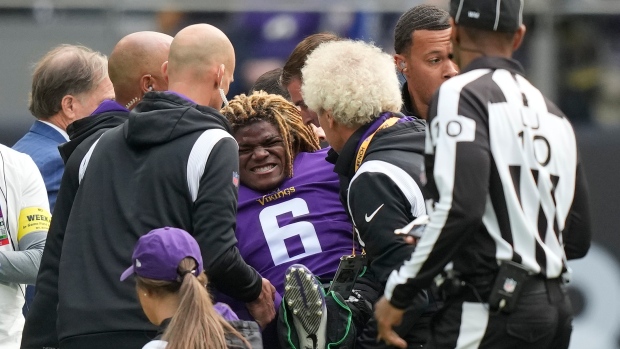 Minnesota Vikings rookie Lewis Cine underwent a successful preparatory procedure and is set to have surgery Tuesday, the Vikings announced.

"After suffering an injury in yesterday's game, Lewis Cine was immediately transported to a local hospital where he underwent a successful preparatory procedure in advance of his scheduled surgery tomorrow, Tuesday, October 4," said the Vikings in a statement.

"Following surgery, Lewis will remain in London to continue his initial recovery process before returning to Minnesota at the appropriate time. A member of the Vikings medical staff will also stay in London until Lewis returns. Head Coach Kevin O'Connell and members of the Vikings organization have been in constant communication with Lewis, who is in great spirits."

The 22-year-old was carted off the field during the Vikings' visit to London to take on the New Orleans Saints as part of the NFL International Series.

Cine, The 32nd overall pick by the Vikings out of the University of Georgia, was blocking a punt when he suffered the injury.

The Haiti-born safety played in all three games for the Vikings prior to his injury.