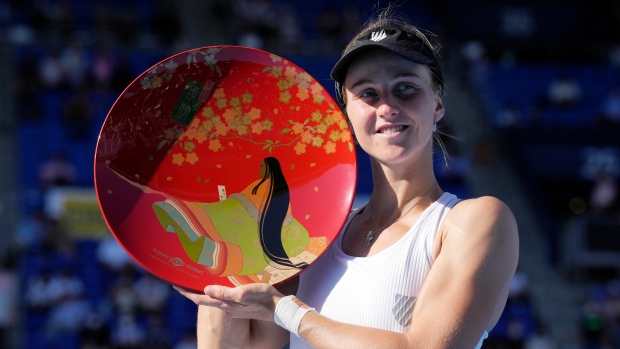 No. 30-ranked Samsonova won in Washington and Cleveland in August and also reached the fourth round of the U.S. Open. The 23-year-old has now won 18 of her last 19 matches and didn’t drop a set in Tokyo.

“It’s amazing. I think I need a little bit of time to realize it, but it’s unbelievable,” Samsonova said. “It was like a nervous match today. I was really prepared physically but I was tired mentally because I was playing singles and doubles every day. I’m very happy with the way I managed the pressure."

Samsonova added that the exclusion of Russian players from Wimbledon had helped her game though she stopped short of supporting the move.

“Wimbledon for me is the best tournament. I love it. The news really impacted me. I had one month without a tournament so I thought let’s work," she said, adding: “I don’t agree that politics should be involved in sports because it’s unfair.”

The match between two power hitters with big serves was close throughout but Samsonova was striking the ball cleaner and stronger.

Zheng, who ousted top-seeded Paula Badosa and No. 4-seeded Veronika Kudermetova, was broken in the first set after giving up her first double fault on deuce in the 11th game.

Samsonova, who defeated Wimbledon champion Elena Rybakina in the first round and former world No. 1 Garbine Muguruza in the quarterfinals, then sent a perfect forehand that landed in the right-hand corner of the court to break the 19-year-old and go 6-5 up. She took the first set with another strong service game that included her third ace.

Zheng was the first to crack in the second set when she handed Samsonova free points with two double-faults in the fifth game. A double-fault by the Russian saw her drop to 0-40 in the next game and the No. 36-ranked Chinese broke back to level at 3-3.

As in the first set, Zheng was broken in the 11th game. A long forehand at deuce gave Samsonova a breakpoint and she converted it with a crosscourt forehand that sent her opponent the wrong way. Samsonova then won her next game to love after three errors by Zheng, clinching the match 7-5, 7-5.

Samsonova has now won all of the finals she has appeared in.

In reaching the final, Zheng became the youngest Chinese finalist at a tour-level event, beating the mark set by Peng Shuai.