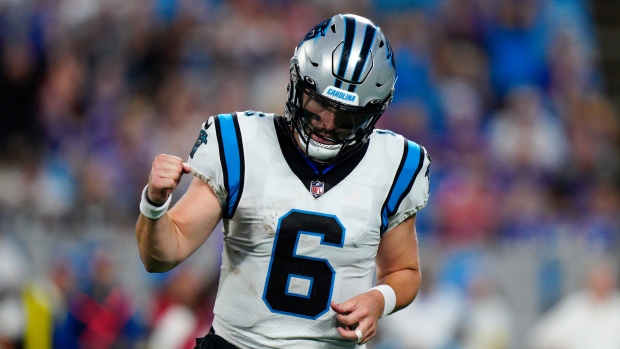 The Carolina Panthers waived Mayfield on Monday, something interim coach Steve Wilks said was a mutual agreement between the two sides. Wilks said Mayfield asked to be released after finding out he wouldn't be the starting quarterback or backup in Carolina going forward.

The Rams will inherit the remaining $1.35 million on Mayfield's contract.

Mayfield is expected to fly to Los Angeles by Tuesday night and could play as soon as Thursday night against the Las Vegas Raiders as the Rams are in the process of sending the playbook to him to make sure he can study the offense on his flight, sources told ESPN's Adam Schefter. Asked if Mayfield has a chance to play against the Raiders, one source told Schefter, "there's a shot."

"It's just kind of acquiring talent, to be honest, and acquiring somebody to come in and evaluate him, but also our offense," Rams offensive coordinator Liam Coen said Tuesday about the Rams claiming Mayfield. "Continuing to evaluate the offense [and] the other players. It's more so about acquiring talent. Just getting somebody in here that we can continue to develop some competitive nature within the room."

"If it is something that can provide a spark and somebody that can come in and help us compete to win football games, that's the ultimate goal for the last five weeks of the season," Coen said.

On Saturday, the Rams put starting quarterback Matthew Stafford on injured reserve due to a spinal cord contusion. Stafford has been sidelined since he injured his neck in the Rams' Week 11 loss to the New Orleans Saints, a game he left after being evaluated for a concussion. McVay later said Stafford felt some numbness in his legs after taking a hit in that game.

Although Stafford is eligible to return in Week 17, McVay said "there's a good chance" the quarterback will not play again this season.

Backup quarterback John Wolford started in the Rams' Week 13 loss to the Seattle Seahawks but was checked out several times by the team's medical staff during the game. He was listed on the injury report on Monday with a neck injury.

If Mayfield doesn't play, either Wolford or third-string quarterback Bryce Perkins will start Thursday night's game. Perkins started in the Rams' Week 12 loss to the Kansas City Chiefs while Wolford was injured.

The Panthers traded for Mayfield in July, sending the Cleveland Browns a conditional 2024 fifth-round draft pick that could have become a fourth had Mayfield played 70% of the snaps. Mayfield did not hit that mark this season.

Mayfield, the first overall pick in 2018, won the Panthers' starting job in training camp after an open competition with Sam Darnold, the third pick of the 2018 draft. He went 1-5 as a starter this season and had a career-low 57.8 completion percentage and threw only six touchdown passes to six interceptions.

Mayfield, who started six games for the Panthers this season, ranks last in the NFL in Total QBR among qualified quarterbacks with a rating of 18.2, which also is the second-worst ever among 521 qualified passers since the stat started tracked in 2006, according to ESPN Stats & Information research. The next lowest this season is Houston Texans quarterback Davis Mills with a rating of 29.2.