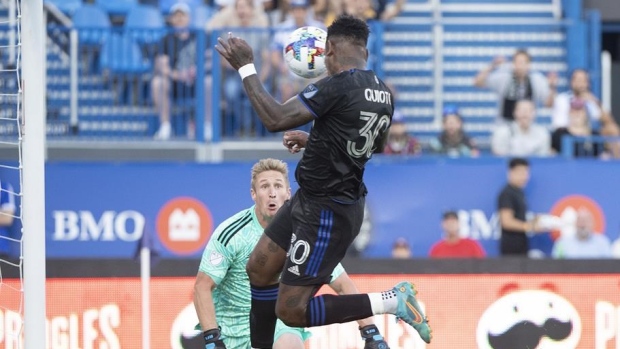 MONTREAL — CF Montreal had the perfect opportunity to bounce back from last week's crushing 4-0 loss to the Galaxy in Los Angeles.

“I don’t care that the team is last, that’s not an issue for me,” said Nancy. “I focus on what we needed to do and we didn’t win this game because we made two mistakes and the fact that they are bottom, it happens."

Samuel Piette said his team did feel the extra pressure to win and kick-start its winning ways ahead of next week’s clash against rivals Toronto FC. The midfielder added that Montreal didn’t underestimate Kansas City and played their game, leading the possession battle with 64.9 per cent, but instead they sank their own battleship.

“We were confident throughout the whole game,” Piette said. “There's also these moments in the game where you're leading in the possession you have the ball, you find your rhythm and you're knocking at the door.

“So defensively, maybe you lack a bit of concentration or a lack of focus, which I don't think we had today, apart from those two goals.”

Montreal opened the scoring in the 13th minute when Lassi Lappalainen dribbled past Ben Sweat on the right flank before crossing toward the far post for Quioto. The Honduran headed home his seventh goal of the campaign.

Espinoza took advantage of a Montreal mishap and tied the match for Kansas City in the 29th minute.

Quioto’s cross bounced off Espinoza and the Kansas City midfielder beat the Honduran to the ball. Espinoza then chipped the ball over Sebastian Breza, who had ventured too far from his net.

Nancy argued that both Breza and Quioto were at fault for the equalizer.

“(Quioto) finds himself last, he tries to make a cross after that he concedes the control of the situation and Sebastian (is at fault) too on the goal,” Nancy said.

When asked about the goalkeeping position being suspect, Nancy simply answered: “Maybe.” Nancy later added that he still had a set starter in Breza and backup goalkeeper in James Pantemis.

“It has always been clear with the goalkeepers about if they have a good performance or not,” Nancy said. “We conceded a few goals in the last few games, some were avoidable. We conceded four goals against Toronto FC (in the Canadian Championship semifinal) that were also avoidable. We will analyze the match, see how that goes and we’ll see for the rest.”

For Piette, the goal was caused by an easily avoidable mistake and thought that the blame shouldn’t be on Breza.

“If Romell controls the ball and plays it for me on the right, he’s someone that doesn’t necessarily like to take risks but likes to be aggressive,” Piette said “So I think that this goal could obviously be avoided.

“I think that it’s unfortunately Quioto’s fault but it’s him (Saturday), it could be someone else next week so I don’t think we should be too harsh on him.”

Kansas City got the go-ahead goal in the 63rd minute. Khiry Shelton freed himself on the right flank after a throw-in and crossed back toward the centre of the box. Walter powered through the Montreal defence and struck the game-winner.

After a standout 2-1 road win against the Seattle Sounders on June 29, Montreal now find themselves with back-to-back losses.

Having lost their last two league games, the MLS bottom-dwellers remained confident to snap their losing woes in Quebec. Both clubs hadn’t played each other since March 2019, Kansas City have now lost only one of their past eight encounters.

Montreal played without Victor Wanyama, who missed the match with a non-COVID illness. The club also announced before kickoff that they had added goalkeeper Logan Ketterer to the COVID-19 protocol.

Montreal now looks forward to next week where they will host rivals Toronto FC on July 16. Kansas City will continue its three-game road stint and take on Minnesota United on July 13.

This report by The Canadian Press was first published July 9, 2022