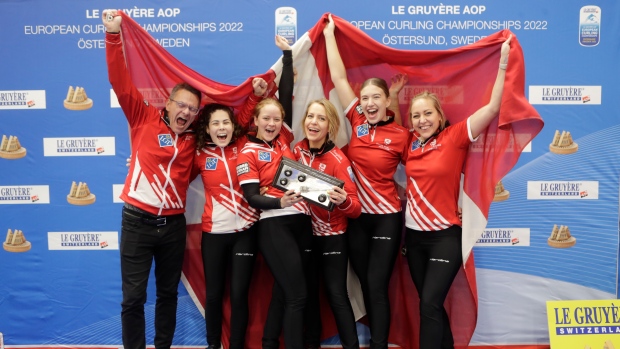 Denmark's Madeleine Dupont has been around the game of curling for a long time, competing in three Winter Olympics and an incredible 13 world championships.

However on Saturday, the 35-year-old skipper and her team from Hvidovre, Denmark picked up the biggest win of their careers.

In the final, Team Dupont scored a single in the 10th end to tie the game before stealing four in the extra to win the gold-medal by a score of 8-4.

Dupont, third Mathilde Halse, second Denise Dupont and lead My Larsen went an incredible 10-1 over the week-long event, topping Scotland's Team Rebecca Morrison in the semi-final, 11-3, to punch their ticket to the championship tilt.

Dupont's best previous finish at the European Curling Champions was 20 years ago, when she claimed silver as an alternate. She also has bronze medals in 2008 and 2009. Dupont earned silver at the 2007 World Women's Curling Championship, losing to Canada's Kelly Scott in the final.

On the men's side of the draw, it was Scotland's Team Bruce Mouat who reigned supreme, beating Switzerland's Team Yannick Schwaller in the final, 5-4, to capture the men's European Curling Championship.

What an ending. Thanks for tuning and all the support from our fans, family, friends and sponsors💙 We couldn’t do it without you!#ECC2022 #AndStill #WeGotTheCheese 🧀 pic.twitter.com/naGhJgWvBN

This was Team Mouat's second straight Euro title and the third of their young careers.

Scotland's lone loss of the week came against the Swiss in the round robin before they defeated them in the gold-medal game. Team Mouat defeated Italy's Team Joel Retornaz in the semi-final while Switzerland topped Sweden, skipped by Oskar Eriksson in favour of the injured Niklas Edin, in the other semi.

This was the first event win of the 2022-23 season for Team Mouat, who are coming off a silver-medal performance at the 2022 Winter Olympics.

Italy would get the better of Sweden in the bronze-medal game.