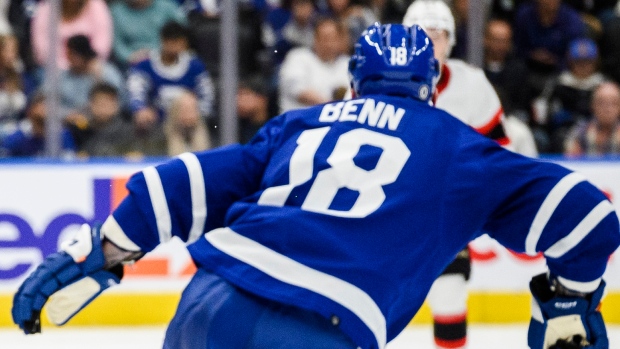 Head coach Sheldon Keefe confirmed after the game that Benn is dealing with a groin injury while Dahlstrom has a shoulder injury. The timeline for their return to action will come after additional evaluation.

Jordie Benn suffered a groin injury and Carl Dahlstrom dealing with a shoulder injury … both will miss some time, coach Sheldon Keefe

Clarity on timeline will come after additional evaluation @TSN_Edge

Benn scored one goal and added seven assists over 39 games with the Minnesota Wild in 2021-22, his 11th season in the NHL.

Over 595 career games with the Dallas Stars, Montreal Canadiens, Vancouver Canucks, Winnipeg Jets and Wild, the native of Victoria, B.C., has recorded 25 goals and 110 assists.

The 27-year-old Dahlstrom, who is also on a one-year, $750,00 deal, appeared in three games with the Maple Leafs last season and recorded two assists. He had 14 assists over 49 games with the AHL's Marlies.