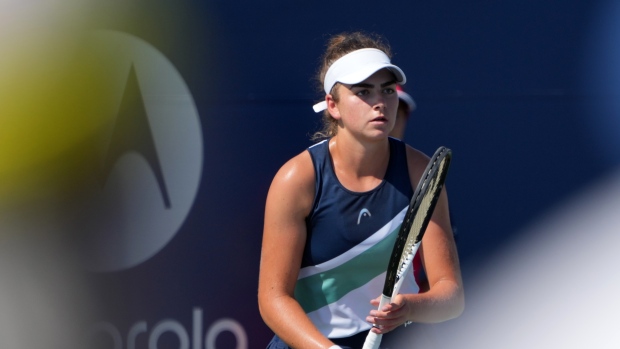 TORONTO — Marina Stakusic's earliest memory of tennis was watching the Rogers Cup at Rexall Centre. The names of the tournament and the stadium have changed since Stakusic was five, but the 17-year-old has now won at least one match at the event that helped her fall in love with the sport.

Stakusic, from nearby Mississauga, Ont., was the only Canadian to advance to the second round of the National Bank Open's qualifying tournament. Toronto's Victoria Mboko and Kayla Cross of London, Ont., both lost their matches on Saturday.

"I came here so many times as a kid and I always wanted to play this tournament," said Stakusic in the media centre at what is now called Sobeys Stadium. "I love Montreal too but Toronto, this is where I grew up.

"I played at this club for many years, so it's really cool to finally be playing the tournament."

Stakusic was beating China's Xinyu Wang 6-1 in the first round when her opponent retired due to injury. She felt that she had the match well in hand when Wang called for an end to play.

"I kind of figured out her game pretty early. That helped me a lot," said Stakusic. "I tried to keep my energy up the whole time and keep moving my feet because I never played in front of such a big crowd.

"That was the main thing, just be relaxed and keep my energy up the whole time."

Stakusic will play Tereza Martincova of the Czech Republic on Sunday in the qualifying tournament's second round. She had to play in pre-qualifying matches to even make the qualifiers.

"I'm just going to try and stay as relaxed as I can," said Stakusic. "I mean, I'm definitely not supposed to win tomorrow so there's not too much pressure on me."

The 15-year-old Mboko pushed Claire Liu of the United States to three sets, eventually losing 3-6, 6-3, 6-4 to the world No. 79. The last match of the day stretched to two hours 28 minutes in baking heat with southern Ontario under a weather advisory.

Cross lost to Spain's Nuria Parrizas-Diaz 7-6, 6-0. Cross said she was disappointed in her result but enjoyed the rest of her National Bank Open experience, including signing autographs and taking photos with fans.

"This is a huge opportunity," said the 17-year-old Cross. "Of course, losing wasn't the greatest but I'm still going 7-6 with someone who's No. 59 in the world right now, so that was insane.

"Just getting the exposure even media wise, doing interviews, stuff like that. Getting a glimpse of what hopefully the future holds for me."

Marie Bouzkova of the Czech Republic is the top seed in the qualifying tournament. She'll play Germany's Tatjana Maria on Sunday.

Stakusic is vying for one of eight qualifying spots in the WTA event's main draw. If she advances to Monday, she will be one of five Canadians on the women's side of the event in Toronto.

The men's tournaments are in Montreal.

This report by The Canadian Press was first published Aug, 6, 2022.