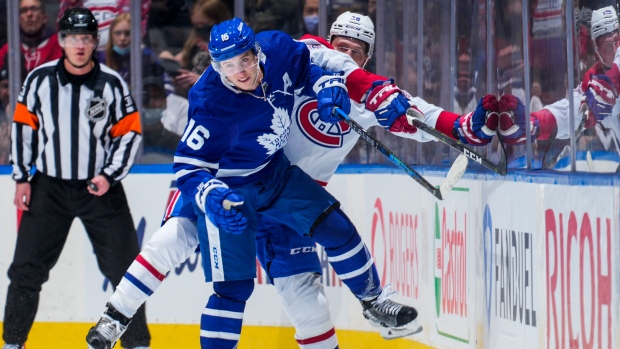 TSN SportsCentre Reporter Mark Masters reports on the Toronto Maple Leafs, who practised in two groups at the Ford Performance Centre on Thursday.

Top-line winger Mitch Marner has been taking some reps as a defenceman during training camp.

"There could be opportunities in games where we might want to give him a look on defence," explained coach Sheldon Keefe. "Whether we're trying to score a goal or playing from behind or whatever the case might be. That's something we'll continue to look at through the preseason and make a determination from there on how we might use it."

The Leafs boast an explosive offence, but Keefe sees the possibility for an upgrade when it comes to transition play and play at the offensive blue line.

Morgan Rielly racked up 68 points last season, which was 40 more than any other Leafs defenceman.

"Morgan's a real standout for us in terms of what he can contribute offensively, but at times you want to have another guy, in particular a right shot, to help with that," Keefe said. "Having Rasmus [Sandin] in the fold helps. [Jake] Muzzin, [T.J.] Brodie and [Mark] Giordano can contribute in their own way, but it's a little different feel there with someone like Mitch."

Marner's skill-set makes him a prime candidate for this type of experiment. He sees the ice incredibly well and is already a key part of Toronto's penalty kill.

"The more and more I watch how we move around in the offensive zone, Mitch spends a lot of time up at the blue line as it is," Keefe pointed out. "Obviously on the power play he plays up there quite a bit ... He's ran the power play from the top in a five-forward look in junior so he's got lots of experience doing that."

Marner took some reps alongside Rielly at practice on Thursday.

"I think he would do well," Rielly said before cracking a smile. "I think he would be considered an offensive defenceman. He'd be able to contribute in that way. We're open to trying anything."

"I've got a pretty good library of clips where [Mitch's] actually playing defence," added Keefe. "Even though he's the forward on the shift he's in the defence spot and quarterbacking things and, at times, even defending."

Marner's move to defence during practice allowed William Nylander to slot in beside Auston Matthews and Michael Bunting.

"Forwards end up having to cover and play on defence far more frequently probably than in the history of our game," Keefe said. "Having those skill-sets is important. Naturally, players younger and younger are going to come up with those kinds of skill-sets. Plus, we are going to see a lot more forwards converted to defencemen at younger ages. If you look at the way Cale Makar plays the game, there are a lot of young kids growing up that are going to want to look like that."

Earlier in practice, Rielly experimented with his own new role. The 28-year-old lefty shifted to the right side.

"Mo's been wanting to take more and more reps there," Keefe revealed. "He sees the situation and knows the more flexibility we have the better. He sort of volunteered to take those reps, which I think is great because, I mean, we played a game last night with six left-handed shots [on defence]."

Timothy Liljegren and Justin Holl are the two top righty options on Toronto's blue line. Liljegren underwent hernia surgery right before training camp and will miss at least six weeks. Brodie, a lefty, has played on the right throughout his career.

"You can see that we need to have more flexibility," Keefe said. "Morgan hasn't had a great deal of [time on the right] so to get that here at this time of year is important."

"You just try and get used to it," Rielly said. "Over time you become more comfortable and you just work at it. It's actually nice in the offensive zone, you get to walk to the middle on your forehand. Like, there are perks to it. It's just a matter of getting familiar with it."

"You got to handle more pucks on your backhand and it's just not overly familiar," Rielly said. "You're used to being on one half of the ice so when you get to the other side it's just a little bit different."

Keefe remains undecided on who will shift over with Liljegren out.

"We'll have to see where everybody's at," Keefe cautioned. "I wouldn't say we have a leading candidate necessarily. I haven't lost sight of the fact that Rielly and Brodie work very well for us [as a pairing]."

Muzzin took part in his first full practice of training camp. The 33-year-old has been dealing with a back issue.

"Just some discomfort and tightness that we had to manage and look after," he said. "It wasn't really an injury. It was just something we had to manage. It was tough, though. You train all summer and you get ready and, all the sudden, something happens. It's kind of frustrating, but I feel good and getting better every day."

"Another good day for him," said Keefe. "He got through everything here today and talking to him afterward he felt good so all positive on that front."

Muzzin is hoping to get into at least one pre-season game.

"I had some back issues when I was younger," he said. "You play a long time and a lot of games and stuff adds up and builds up. It's something we've managed really good for a long time and we have to continue with it."

"It's unreal," he said. "The guys in there will prolong your career."

Jordie Benn (groin) and Carl Dahlstrom (shoulder) got hurt in Wednesday's game. Both defencemen are expected to miss time with the result of MRIs pending. The injury situation on defence led to a resolution of the Sandin contract stalemate.

"This morning, Rasmus Sandin and [agent] Lewis Gross reached out to us and informed us that after watching our game last night and seeing more injuries accrued by our defence that they wanted to get this locked in today so Rasmus could get over to Toronto and help his teammates," said general manager Kyle Dubas in a statement posted by the team.

Sandin signed a two-year deal with an annual-average value of $1.4-million.

Nylander awoke to a text from his friend alerting him to the news. The pair train together in Sweden during the off-season. How'd Sandin look in the summer?

"Great, as always," Nylander said. "Poised with the puck and looks bigger this year too so hopefully that translates to his game."

The Leafs expect the 22-year-old Sandin, who has played 88 National Hockey League games, to take a big step in his development.

"As a young player with that level of talent and the experience that he's gained in the league, I think that he's at the right age now to really start to blossom," said Keefe. "He's got the experience of knowing his strengths and weaknesses. In this situation, he'll need to come in and get up to speed with the guys, which I don't expect to take him too long. He's an important young player for us that brings a lot to our defence group with his skill-set."

"You've seen the few snippets when he's been there," Nylander. "I don't know how many games he's played, but when he's been out there he's been tremendous with the puck and making really good plays."

"He can go wherever he wants," Nylander said.

Gaudette returned to practice on Thursday, but skated in a red, no-contact sweater.

"It's something I could probably play through if needed, but now's not the time to push through injuries," the 25-year-old said.

Gaudette opened camp with a big opportunity skating alongside John Tavares and Marner. He was able to finish Saturday's game and felt he made a decent first impression.

"I liked my game," he said. "I could have carried the puck through the neutral zone a little more instead of chipping it in and going after it, but I really liked my game away from the puck. Defensively I did pretty well and that's something I've been criticized on. I played heavy. I played strong and played the body and that's my style of game and that's what’s going to get me some playing time here."

Note: Players bolded are on the roster for Friday's pre-season game against the Ottawa Senators in Belleville, Ont.