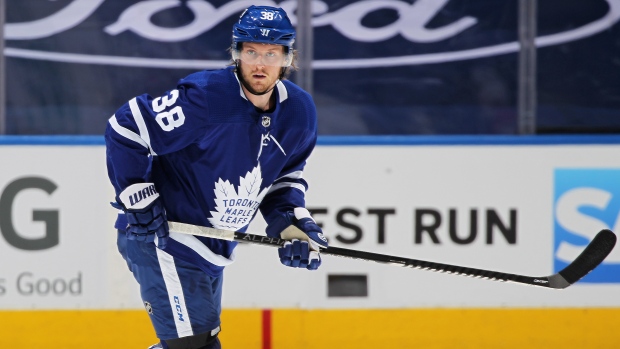 The Maple Leafs practised in two groups at the Ford Performance Centre on Sunday.

Waiting out a stalled contract negotiation while at home in Stockholm, Rasmus Sandin did something different.

"I was actually out walking in the woods a couple of times and that's something I've not done before," the 22-year-old revealed. "I was looking for some chanterelle [mushrooms] in the woods. I didn't look at my phone. I was just focusing on finding some chanterelles out there. I [used them] in some cooking so that was a big help. I didn't have to go buy them in the store."

Sandin, who was a restricted free agent with no arbitration rights, finally signed a two-year, $2.8-million contract with the Leafs on Thursday. Any regrets about how things played out?

"Every negotiation is different," he said. "I'm super excited to be back and the sun's shining right now so I can't complain."

"Better than I thought," he said of the session. "It was really, really fun to see all the guys."

"He didn't look like he was off pace at all," said Mitch Marner. "He looked like he was fresh."

Sandin is still going through the team's fitness protocols and needs to get up to speed on the systematic changes that were implemented during the first week of camp.

"It's going to take him some time to really get to the point where it would be fair to evaluate him," said coach Sheldon Keefe. "He's running on the treadmill going pretty quick here right now. He'll have to get settled in, in that sense, so he won't play tomorrow. The intent will be to get him in at the end of the week."

The Leafs will play in Montreal on Monday before wrapping up their exhibition schedule with games against the Detroit Red Wings on Friday and Saturday.

Sandin's summer may have lasted longer than anticipated, but the 5-foot-11 defenceman put the time to good use. He's bulked up going from 178 pounds to 194.

"Lots bigger," he said with a smile. "I feel stronger. I feel better in my body overall. I feel healthy. I just feel really good. I'm excited to be back and hopefully that will show."

Sandin, a lefty, skated on the right side at Sunday's practice.

"I feel comfortable on the right," he said. "I felt pretty good out there today ... I need to prove myself. I need to show them I had a good summer and be ready when the season starts."

With righty Timothy Liljegren out following hernia surgery, the Leafs need one of their lefties to shift over to start the season. Sandin is a prime candidate.

"It's something we want to look at, for sure," Keefe confirmed. "I spoke with him about that and we will get him those reps. I know he's done that before at different times. We'll see how it all shakes out."

Keefe also coached Sandin during his time with the Toronto Marlies in the American Hockey League.

"I've seen him over there before so I'm confident he can make that switch when needed and called upon," Keefe said.

"They're kind of like blinders," said Matt Murray. "They take away your peripheral vision, basically. It's just a tracking aid. It forces you to use the middle of your eyes and the strongest part of your eyes."

Per manufacturer Swivel Vision, the goggles limit what an athlete sees so as to utilize their optimal field of vision in order to gain better focus and react quicker.

"It's a little bit challenging," said third-string goalie Erik Kallgren. "Obviously, it makes it harder to track the puck. It's a good tool to use before practice."

"It's kind of like tunnel vision," Kallgren said. "It narrows down your [vision] on the side so you got to be even more precise tracking the puck."

Other teams are also using these devices, which look like sunglasses.

"It's something that's gaining a little more traction, from what Curtis has told me, around the goalie community," Keefe said. "I think you'll see more of it happening around the league."

Pierre Engvall took part in his first practice of training camp on Sunday.

"He actually did a little more on the ice than he was expected to do so that's a sign to me that he was feeling good out there," Keefe noted.

Engvall has been sidelined due to an off-season injury.

"I twisted my foot on the ice this summer," the winger said. "I've been doing rehab and it's going better and better."

Will he be able to get in a pre-season game?

"I don't know yet. I felt good today so that was definitely progress."

"I just want to keep doing what I did last year," he said, "but I think I have better in me and can play better. I want to get better defensively, but also put [up] some more offensively."

With John Tavares (oblique strain) sidelined to start the season, Michael Bunting will move into the net-front role on the top power-play unit alongside Marner, Auston Matthews, William Nylander and Morgan Rielly. Bunting plays with Matthews and Marner at even strength.

"With the familiarity with Matthews and Marner that's a natural fit," Keefe said, "but he's also very good around the net so I think the skill sets, in that sense, are similar. The biggest difference that Bunts doesn't bring is the faceoff presence both in John's ability to win the draw, but also if John takes the draw it allows Auston to be in more of a shooting position."

Following a three-point performance on Friday, Nick Robertson found himself skating on the second line at Sunday's practice beside Nylander and Alex Kerfoot.

"The last two pre-season games, to me, this is the best I've seen Nick look in a Leafs jersey," said Keefe.

Does he look any different to teammates?

"Just hungry," observed Marner. "He wants to make this team pretty bad and you can see it in his games and you see it in practice."

Keefe sees a player, who is learning what it takes to influence the game at a higher level.

"You have to figure out what works for you and how you can create offence," the coach said. "What you've done to this point works right away for some guys and for others they have to make adjustments. I'd put Nick in the adjustment category. I think that takes time and he's still a young guy (21). He appears, to me, to be making those adjustments and we can see the contributions coming as a result."