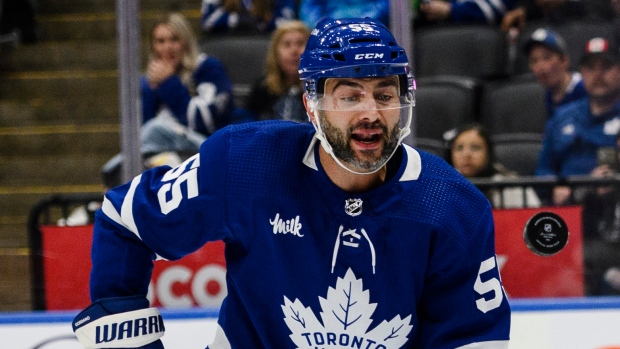 The Maple Leafs held a team meeting at PPG Paints Arena on Saturday.

With injuries piling up on defence, Mark Giordano has gone from a sheltered third-pair role to Toronto's go-to guy. He logged nearly 25 minutes against the streaking New Jersey Devils on Wednesday and was up over 23 minutes against the big, physical Minnesota Wild on Friday.

"It honestly doesn't feel too tough," the 39-year-old insisted. "It's a few more shifts each period, it feels like, and sometimes you almost feel better when you're going out every other shift and not thinking about the mistakes you made. You just get out there and play."

"It's pretty impressive, 39-years-old and he looks like he's 25 out there," said 31-year-old winger Calle Jarnkrok. "I got to talk to him about that and see if I can get going until I'm 39 as well."

Giordano averaged 17 minutes and 45 seconds of ice time in the first 15 games of the season. In seven games since T.J. Brodie got hurt, Giordano is up to 22 minutes.

"A competitor first and foremost," observed coach Sheldon Keefe. "We use that term a lot, you know, 'competing' and being 'a competitor' but he is a world-class competitor. For me, as I've gotten to know him more and watched him closer, that is at the root of who he is as an individual. That's why he's still playing at his age despite what he's accomplished in his career."

Giordano, who has been paired with Justin Holl, is making some minor adjustments on off days to preserve energy. He's also taking fewer reps in practice. On the ice, he's even more locked in.

"It's about reads and making good plays under pressure so you don't have to defend as much," the Toronto native explained. "You try and stay fast, keep your feet moving and get up in the play. The way the game is now, the best defence is trying not to play in your own zone for extended periods of time. So gaps and shutting down plays at blue lines becomes more important so you're not in your own zone. I think we've done a good job of that."

"All the experience he has allows him to pick his spots and he doesn't put himself or his partner or his team in bad spots very often," Keefe noted. "No matter what comes his way, he's ready for it."

The last two games have been the most Giordano has played since being traded to the Leafs at the deadline last season.

"I feel comfortable doing it," Giordano said with a smile. "I've obviously done it before."

Giordano averaged 21 and a half minutes per game with the Seattle Kraken before being traded to Toronto. He logged 23 minutes a night during his last season with the Calgary Flames (2020-21).

Saturday may be Giordano's stiffest test yet. It's a back-to-back situation and the Penguins have won five straight since losing to the Leafs on Nov. 15.

"Without question, it seems like they have their swagger back and they're coming with lots of pace and energy and confidence," said Keefe. "I think they have the ability, as they've shown over time, to be a team that when they find their rhythm and their groove, they're real tough to handle."

In the previous game against Pittsburgh, Giordano only played a few shifts against Sidney Crosby. It was Morgan Rielly who soaked up most of those minutes. With Rielly (knee) joining Brodie (oblique) and Jake Muzzin (spine) on the sidelines this week, Giordano is gearing up to battle the Penguins captain.

"It's tough," Giordano said of the Crosby match-up. "It's always tough. Obviously, he is who he is. He's been the best player in our game for a long time. He's a guy who's extremely tough to play down low and in the corners. He's so good with the puck and spinning and getting around you."

"Not many guys have been able to shut him down, I'll say, over their careers so you just try to manage it as well as you can," Giordano said.

The Leafs will need their forwards to continue being committed defensively.

"Everybody is tracking back, taking care of they slot and that's what's making a big difference for us," said Jarnkrok.

"Keep doing what's been making us successful lately," Giordano said of the game plan, "clogging up the middle, trying to take away speed from the other team."

Crosby was minus-four in the last game against the Leafs, which matched his worst rating of the season.

Giordano is also on the top penalty-kill unit at the moment. Last Saturday, he scored his 13th shorthanded goal, which tied Chris Chelios for fifth all-time among defencemen. He's three back of Ray Bourque and Bobby Orr.

"Those are pretty big names you mentioned there," he said with a laugh. "A lot of teams are using four forwards on the power play and you can catch guys either being out there too long or forwards not playing defence. Usually they're not used to being back there so you can sometimes get up in the play and make things happen so I try to do that when I can. It's something I try to do, because I know when I'm on the power play going the other way it sucks when guys are pressing and trying to score."

You want Mark Giordano on your penalty kill.

Giordano benefited from a beautiful Mitch Marner back pass on the goal against the Buffalo Sabres.

"Seen Mitchy do that play against me," Giordano said. "He had one in Seattle. Buried me for a minus on that one last year so I was expecting it and it was a great play by him."

what a play by Marner to Giordano pic.twitter.com/TQ9QXX3kD7

Jarnkrok made the most of his chance to play alongside Marner and John Tavares on Friday. He scored a goal and fired two shots on net while logging nearly 15 minutes.

"It was fun playing with those two. Two elite players. A good opportunity for me," said the Swede, who appreciated the uptick in playing time. "Obviously, it's easier if you're out on the ice instead of sitting on the bench."

It was the second most Jarnkrok has played in a game as a Leaf and his highest total since Oct. 17.

"He brought energy," Marner observed. "Brought pace. Made a lot of great plays off the wall. It's a big goal for us ... For his first game with us, he came in quickly and meshed with us really well."

Marner extended his point streak to 15 games with a goal of his own.

"John and Mitch were really good," said Keefe. "I think no matter who was playing with them, they would have had a good night. I thought that line did a good job for us."

Erik Kallgren starts on Saturday and will look for redemption after his giveaway led to a late tying goal by the New York Islanders on Monday night.

"He's going to bounce back from that," Jarnkrok promised. "I can't wait to see him tonight."

"These games come fast and furious," said Keefe. "I've already forgotten about that situation. Erik's dealt with different situations that have come his way very well throughout his time here so he'll have a fresh mind and be ready to go."

Kallgren will also be looking to avenge an earlier loss to the Penguins. He wasn't happy with the game-winning goal he allowed to Brock McGinn on Nov. 11.

Matt Murray received the team's player-of-the game belt from Pontus Holmberg on Friday after stopping 25 of 28 shots in Minnesota. Murray preserved the win with a desperation save on Kirill Kaprizov in the dying seconds.

"I got a bit fortunate with that one, honestly," he said. "It goes down to [Mats] Zuccarello, who made the pass, and couldn't really see through a defenceman so I was late getting across and he just kind of missed his shot. He shot it right in the middle of the net."

Keefe highlighted a stop Murray made in the first period, which set the tone for the game.

"The one that saves the game at the end is massive, but there was one early in the game where there was a scramble and they had two or three shots in succession all around the crease," the coach recalled. "All of a sudden, there is a guy who is 6'5 and sticks his leg out there to make a huge save. The reaction from our bench was that a lot of guys had disbelief. They had the sense it was going in and, all of a sudden, it doesn't. Those are the types of saves that give your team confidence. 'Okay, we can win this game.' That is the one that stood out to me. That was early in the game. He didn't look back from there."

The Wild weren't happy with Murray, who knocked his net off its mooring on three separate occasions, including during one shift when the Leafs got hemmed in their own end. Minnesota felt the 28-year-old should have been penalized for delay of game.

"I don't know what was going on there," Murray insisted. "I use the net to push off all the time and, for whatever reason, it just came off a little bit easier."

Evason upset about the Murray net moorings issue tonight. Says it makes no sense that you can do that three times with no repercussions on scoring chances/extended shifts and goalie coach Freddy Chabot told him it’s a “trend with that goaltender”

---
Denis Malgin will draw back into the Leafs lineup on Saturday night, Keefe confirmed. Wayne Simmonds will be a healthy scratch after playing in Minnesota.