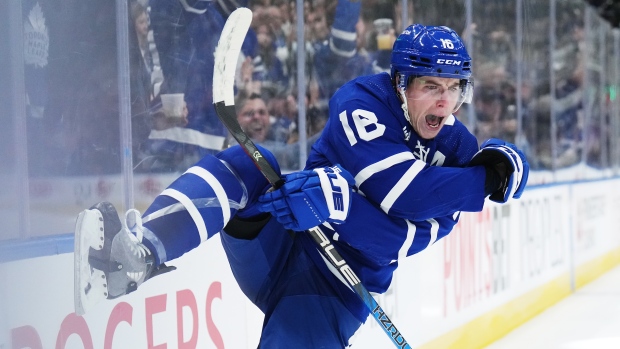 The Maple Leafs held an optional skate at Scotiabank Arena on Wednesday. The Sharks held a media availability.

Victor Mete remembers Mitch Marner putting together a 21-game point streak when they were teammates on the London Knights in 2015-16.

"Every night he was able to produce," the Leafs defenceman said. "It didn't matter what was going on or who we were playing. He was always able to put something on the board for us and it was great."

Now, Marner is doing it again, but in the National Hockey League. He carries a 17-game point streak into Wednesday's game against the San Jose Sharks.

"I think this is a little bit crazier just because of the competition he's facing," Mete said. "It's pretty incredible. It's crazy."

Marner's play is fuelling Toronto's sweet November. The team has just one regulation loss this month (10-1-3).

"It's not just about himself," observed coach Sheldon Keefe. "It's about serving the team and doing what he can to help us win. I think that just helps the confidence of your group. When your best players are like that, you have a real good chance of winning every night."

Marner is playing chess right now and isn't afraid to move the pieces.

It wasn't funny for the Detroit Red Wings, who watched Giordano gain the offensive zone and deliver the puck to Marner, who beat Ville Husso for his seventh goal of the season.

"He's a zone or two behind and he's seeing the play develop and calling for Gio to be aware of him," Keefe said. "Definitely he's a vocal guy. Whether that's letting them know he's available and wants the puck or directing traffic to send the pucks to certain spots or speed up or slow down, he's really taking charge out there. The better his game is the more of that you get."

"He talks a lot," said Mete. "You can always hear his voice wherever you are."

"He's an extremely smart player," said Sharks defenceman Erik Karlsson. "He knows how to feel the flow of the game and he always ends up at the right spot [and at] the right time."

If Marner picks up a point on Wednesday, he will tie the franchise point streak record, which is currently shared by Darryl Sittler (1977-78) and Eddie Olczyk (1989-90).

"Unbelievable," said winger Nick Robertson, who returns to the Leafs lineup against the Sharks. "He's like a magician out there. He just creates a lot of things. He makes those simple plays that cause bigger plays to happen. He uses his feet as an advantage and [it's] something I can learn from ... He's on this streak and hopefully we can continue it for him."

It's business as usual, though, for Marner.

"You get into streaks like this because you don't make a big deal of it," said Keefe. "You just focus and go out and play. You focus on the game and the process of what makes you great and then, all of a sudden, you get 10, 12 games in and you're like, 'I got a pretty good thing going on' ... You want to see your players get rewarded and you want to see them get accolades and all these things, but always understand what has gotten you to that point, because the moment you get off track with that, it doesn’t go your way."

"I've known him from when we were little," Mete noted. "To me he's had the same personality. He's older now, but he's still kind of the same. It's nice to see that he still has the kid in him."

Marner is hot and now Auston Matthews is heating up. He has scored in consecutive games, but it's the way Matthews has scored that has Keefe feeling optimistic.

"He's had some better looks, some cleaner looks," the coach pointed out. "You look at the two goals he scored towards the end of the trip, he's got clean looks in the slot, basically one-on-one with the goaltender. He's had some of those that haven't gone in for him ... On both goals, they look like no doubters. He knows where it's going. He knows where he wants to put it and he's beating the goalie clean, so that's a good sign."

Matthews has scored in nine of 10 career games against the Sharks, including earlier this season.

Aaron Dell gets the start of the Sharks, who also played on Tuesday in Montreal. Matthews has scored two goals in two career games against Dell.

With Matthews and Marner currently playing on separate lines, the Leafs are a matchup nightmare for most teams. But the Sharks stress that this Leafs team is about more than the superstars.

"They've added an awful lot to their game over the last few years," said Sharks coach David Quinn. "I know people make a big deal out of the fact they haven't won a playoff series, but they look different. They looked different in the playoff series last year. They're not far off. They've added an element of grit, commitment to their defence, and when you do that [and] got the talent they have, you're very, very dangerous."

"They play a style of play that is very hard to beat," said Karlsson. "They got a lot of skill but, at the same time, I do think they want to win, and they play hard out there in all aspects of the game."

Robertson will suit up for the Leafs for the first time since last Wednesday. He replaces Denis Malgin on a line with David Kampf and Zach Aston-Reese.

"Those guys are workhorses," the 21-year-old winger said. "I'm happy to play with them. Excited. Sometimes a change of view gets things going."

Robertson has spent most of his game time this season on the John Tavares line but has struggled to produce. Since a two-goal opener, Robertson has just three assists in 10 games.

Hollowell, who made his NHL debut last week in New Jersey after the Rielly injury, picked up his first NHL point on Monday on the Matthews goal.

"The Big Mac, he's the man," Matthews said with a big smile. "I told him after the game, he's undefeated in the NHL so far, so that's definitely not a bad thing."

What's it mean to hear that from the reigning Hart Trophy winner?

"It's pretty cool," Hollowell said. "He's a top guy on this team. Top guy in the league. He's always kept it real humble with me. He's never been too big for me and always been a great guy."

Hollowell got to know Matthews as well as Joe Thornton and William Nylander when he quarantined with them in the same house before training camp opened for the 2020-21 season.

"He didn't say a word for the first three days and then Jumbo just opened him right up," said Matthews.

"I wasn't too sure what to expect," Hollowell recalled. "I was coming in late and then I met Jumbo, and he got things going from there. He forces you out of your shell and loosens you up a little bit."

"He messaged me after my first point and just told me to keep things going here," Hollowell said.

Hollowell and Mete, both 5-foot-9, have managed to soak up some important minutes as the Leafs deal with a series of injuries to their defence. But that hasn't mean it's been a smooth ride. Does Hollowell have a welcome-to-the-NHL moment?

"When I got walked by [Evgeni] Malkin, that was a pretty good one," he said with a smile. "It's just one of those plays, one-on-one, and he got me that time. Hopefully, next time I'll get him."

What's the biggest challenge for the Leafs on Wednesday?

"Karlsson," Keefe said. "The way he's playing, he's driving so many things and he's such a unique player from the back end. It presents real issues if you don't take care of that. I thought he really had his way with us when we were down in San Jose."

Karlsson posted two assists and scored the overtime winner against the Leafs on Oct. 27.

"One of the best skaters in the league," said Leafs defenceman and fellow Swede Timothy Liljegren. "Good hockey IQ and he's obviously feeling it, so need to shut him down ... He's a player, especially for me growing up, you watch a lot. He's a fun player to watch, but hopefully today he's boring."

Karlsson leads the Sharks with 32 points in 25 games.

"It seems like he's got his jump back," observed Sharks captain Logan Couture. "He can break the puck out on his own. Through the neutral zone, get your head up as a forward and get your stick on the ice and it usually lands on it."

There's still no timeline for the return of T.J. Brodie, who has been sidelined with an oblique injury since Nov. 11. The defenceman wasn't with the team on the recent road trip, because he didn't respond well in the initial days following the injury.

"He hit a bit of a wall there," Keefe said, "but it seems like that's started to turn. He's been skating continuously and today was his best day on the ice so that's a real good sign."

Keefe listed Ilya Samsonov as "day-to-day" following Tuesday's practice even though the 25-year-old goalie had been cleared to play.

"I said that mainly to let him off the hook if he wakes up and is not quite feeling right," the coach explained.

Samsonov woke up feeling just fine and will start against San Jose. It will be Samsonov's first game action since hurting his knee while trying to stop a Brad Marchand penalty shot on Nov. 5.