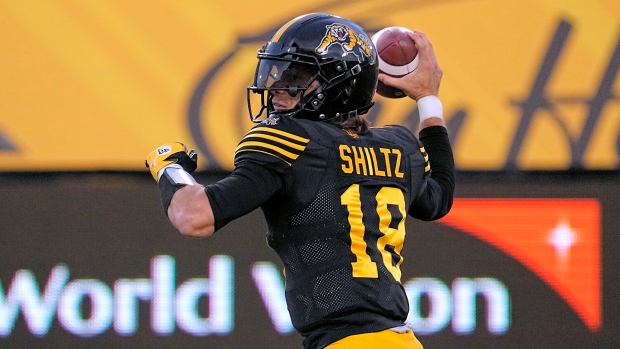 Making his first start for the Hamilton Tiger-Cats against the Toronto Argonauts this season since coming over from the Montreal Alouettes, backup quarterback-turned-starter Matthew Schiltz is aware of the gravity Friday's game holds.

"Any time we play a divisional opponent at home, really any time we pay at home, it's an important game," Shiltz said to the media. "Going against a division rival - especially Toronto - makes it big and obviously, they're first place in the division, so we want to do everything we can to get the two points this week. That's our goal."

Being thrust from the sideline to under centre comes as déjà vu for the former Montreal Alouettes pivot who, in a similar situation in 2021, saw action following an injury to then-starter Vernon Adams Jr. in Week 10.

Shiltz took the reins for the Als' offence the following week, posting 303 total yards and a pair of touchdowns in a win over the Ottawa Redblacks. He went on to make three consecutive starts for the Als, tallying 599 passing yards, three touchdowns and an interception before Trevor Harris, who was acquired from the Edmonton Elks, took over.

Ahead of Friday's game, Shiltz spoke about how he has been and will continue to stay ready for when his number is called.

"This is the situation you prepare for every week obviously if the starter (Dane Evans) goes down, being in a backup role," Shiltz said. "But from my perspective, I'm just going to continue to do what I do during practice, during the practice week and those reps and when I get those reps in a game, just make it feel like practice."

While the Tiger-Cats and Argonauts meet again just six days removed from their previous meeting, Shiltz isn't expecting to see the same defence that was on display at BMO Field.

"I'm sure they're going to make adjustments just like we're making adjustments, so it's going to be crucial to kind of figure out what they're doing and make any in-game adjustments we need to make and just keep on playing."

When asked if this week's game is a "must win", Shiltz said every game is.