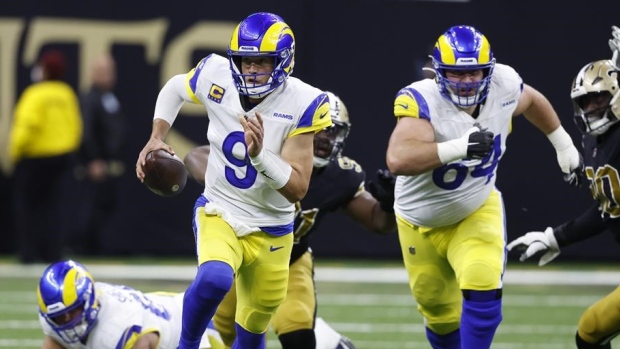 THOUSAND OAKS, Calif. (AP) — Quarterback Matthew Stafford will miss his second game in three weeks for the Los Angeles Rams after going back into the NFL's concussion protocol.

Sean McVay confirmed Stafford will sit out when the Rams (3-7) visit the Kansas City Chiefs on Sunday, but the coach said his Super Bowl-winning quarterback doesn't necessarily have a concussion.

Instead, McVay described Stafford's injury as a “neck issue.”

The Rams' season of miserable injury news continued Wednesday with Stafford's latest setback and the loss of key defensive tackle A'Shawn Robinson, who is out for the season after tearing the meniscus in his knee.

Stafford left the Rams' loss at New Orleans early last Sunday when he felt numbness in his legs following a hit in the third quarter. Stafford has been examined by doctors who haven't yet determined whether he incurred a concussion, but Stafford is still back in the protocol because of the way he exited the game, McVay said.

“We're checking all those boxes and going through all that,” McVay said. “There's a lot of layers to it, but you certainly want to make sure you're doing everything in your power to (address) exactly what went into that feeling, and letting the experts be able to give their opinion, look at the MRI and those scans, and be able to give the right information so that we can move forward accordingly with him.”

Stafford missed the Rams' loss to Arizona two weeks ago after going into the protocol the first time. The Rams still haven't confirmed whether Stafford incurred a concussion in that instance, either.

McVay said Stafford and the Rams haven't decided whether the quarterback could go on injured reserve or even be shut down for the season. Los Angeles has only six games remaining after Sunday and a daunting road to playoff contention.

The Rams are uncertain who will play quarterback when they face the Chiefs on Sunday.

Third-stringer Bryce Perkins will get most of the snaps in practice because backup John Wolford has a lingering neck injury that forced him to miss last week's game at New Orleans. Los Angeles signed quarterback Case Cookus — a Thousand Oaks native who most recently played in the USFL — to the practice squad for depth.

Stafford is one of the NFL's most durable quarterbacks over the past 12 years. He had missed only eight games in that stretch — all in the 2019 season with Detroit because of a back injury — before his absence against the Cardinals.

Robinson was hurt against the Saints, and his season-ending injury means he might have played his final snap for the Rams entering free agency. Robinson left Detroit to sign with the Rams in 2020, and he played a key run-stopping role on Los Angeles' defense while playing in all 21 games on the way to a championship.

Robinson's absence and the Rams' decision to waive linebacker Justin Hollins one day earlier mean the LA defense will have significant changes before it tries to slow down Patrick Mahomes and the Chiefs. Defensive linemen Marquise Copeland and Bobby Brown will get additional playing time in Robinson's absence, while Hollins' pass-rushing role will be filled by Terrell Lewis and possibly by Michael Hoecht, a 310-pound defensive lineman with athleticism.

McVay said the Rams waived Hollins and leading rusher Darrell Henderson to create opportunities for other players in front of two soon-to-be free agents unlikely to return to the team. Henderson was claimed by Jacksonville, and Hollins was claimed by Green Bay.

The Rams' top running backs at Kansas City will be Cam Akers and rookie Kyren Williams, who recently returned from a long-term injury absence. Los Angeles has the NFL's 31st-ranked rushing offense.