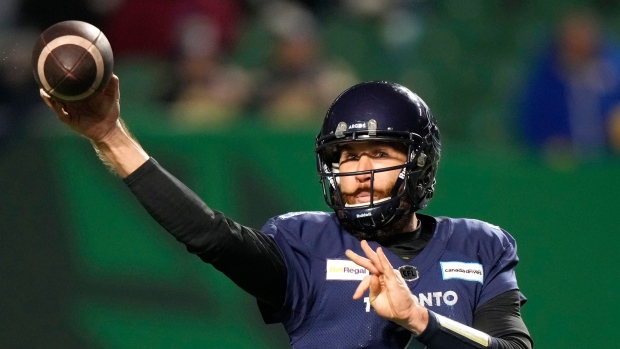 Toronto Argonauts quarterback McLeod Bethel-Thompson underwent successful surgery on the thumb of his throwing hand after suffering an injury in the 109th Grey Cup, according to TSN's Farhan Lalji.

I’m told that #Argos QB McLeod Bethel Thompson had surgery last week on the thumb in his throwing hand that he hurt in the Grey Cup. The procedure went well & he hopes to begin throwing in January. @CFLonTSN pic.twitter.com/rcKO19YOcQ

The 34-year-old from San Francisco, Calif., suffered the injury early in the fourth quarter. He was forced to leave the game, prompting backup Chad Kelly to be thrust into action.

Bethel-Thompson finished the game 15-of-38 for 203 yards and Kelly threw for four passes for 43 yards as the Argonauts captured their first Grey Cup title since 2017 with their 24-23 win over the Winnipeg Blue Bombers.

The former Sacramento State Hornet posted his best season in the CFL in 2022. Bethel-Thompson threw for a career-high 4,731 yards to lead the league. He also scored a career-second best 23 touchdowns.

Lalji adds that Bethel-Thompson hopes to begin throwing in January.