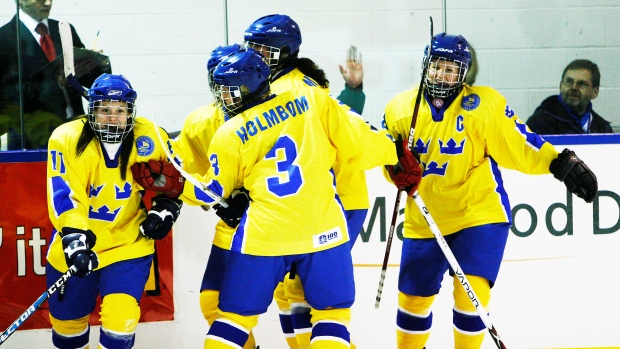 For the first time in three years, Sweden is back in the top division of the IIHF Women’s World Hockey Championship.

Sweden will compete in Group B when the tournament gets underway Aug. 25 in Denmark. Once one of the best four teams in women’s hockey, the Swedes were relegated from the top division in 2019 after finishing ninth in the tournament that year.

“It feels good, and hopefully we're going to take care of this opportunity,” defenceman Maja Nylén Persson told TSN. “I think everyone is really excited to compete with the best teams in the world.”

Under usual circumstances, Sweden would have had a chance at promotion by playing in the Division 1 A World Championship, where the first- and second-place teams qualify for the top division. But that tournament has been cancelled the past two years due to COVID-19.

Sweden earned its spot in this year’s tournament after Russia was expelled due to the country’s invasion of Ukraine.

“I think Sweden belongs in the [top] group,” Nylén Persson said. “It has been a little bit frustrating that we haven't had the chance to play to get ourselves a chance to go up to the [top] group.”

The promotion comes after a tumultuous time for Swedish women’s hockey and its federation. Following relegation in 2019, players on the women’s national squad boycotted team activities, protesting their treatment by the Swedish Ice Hockey Association.

The two sides were able to reach an agreement after a few months. Nylén Persson, who made her debut with the national team in the 2016-17 season when she was a teenager, says there have been noticeable improvements since the boycott.

“I think we’ve had better communication when we go to camps and stuff like that,” she said. “And that's what it's all about – to listen and have a two-way communication.”

Ulf Lundberg took over as head coach in 2020 and echoed the importance of creating a better environment.

“We’ve been working a lot with communication to talk to each other instead of talking about each other,” he told TSN. “We're working hard and we will always want to do the best for the players when it comes to facilities, environments to practice in, and so on.”

Sweden last earned a medal at the world championship in 2007, when the team took home bronze. The Swedes haven’t finished higher than fifth since 2011.

Lundberg is leaning heavily on the next generation of players to step up. The roster for this year’s world championship has an average age of 22. Veterans like goaltender Sara Grahn, forwards Lisa Johansson and Emma Nordin, who was Sweden’s flagbearer during the Opening Ceremony of the Beijing Olympics, were not named to the team.

“We have a lot of younger players coming up, but they need experience, and how do you get that experience except from playing those international games on the highest level?” Lundberg said. “You always talk about those two poles, the creativity and the discipline. In ice hockey you have to do both, the way I see it. I've seen where we have a better balance between those two right now, because I really want the players to be brave and to use their skills out there.”

Peter Elander coached Sweden for almost a decade from 2001 to 2010, leading the team to two bronze medals at the worlds and an historic silver medal at the 2006 Olympics.

Despite Sweden returning to the top division at the worlds, Elander believes there’s still a lot of uncertainty around the team.

“I don't think Sweden really know where they are in the hierarchy of women's hockey national teams,” he told TSN.

In particular, Elander disagrees with the decision to leave veterans like Grahn and Nordin off the current roster.

“There are too many rules [on] who should be in…. We don't have a Canadian population of women’s hockey players. You pick the best players. That was my philosophy,” he said. “There's a lot a question marks around Sweden. I hope it's going to be an exclamation point, but I'm not so sure.”

While there may be question marks surrounding the senior team, there have been recent positives for women’s hockey in Sweden. The under-18 team finished fourth at the U18 World Championship after narrowly losing 3-2 to the United States in the semifinals.

Several young players stood out for Sweden, including Tuva Kandell, who finished in the top 10 in tournament scoring and was named Best Defenceman.

Sweden also launched a program called the Olympic Offensive this year, which is designed to give extra camps and ice time to top up-and-coming younger talent who are not yet on the senior team.

“The federation, after that 2019 debacle, they've really taken to their core – we're going to be better on the women's side,” Elander said. “Sweden has an extra ticket now and I hope they can use it to stabilize. I think the [Under 18s] showed that there are some young players coming up.”

The Swedes finished third in Group B at the Beijing Olympics in February. They lost their first two games to Japan and Czechia but bounced back for wins against China and Denmark to advance.

“I think we started the tournament okay. But okay is not good enough,” Lundberg said.

In the quarter-finals, Sweden met Group A winners Canada in their first Olympic meeting since 2010. The Canadians, who would go on to claim gold, decisively beat the Swedes 11-0 while outshooting them 56-11.

“I think Nelson Mandela said, ‘I never lose. I either win or learn.’ And that was a really good game to learn for us, to feel that intensity, to meet that competition level in every second,” Lundberg said.

Nylén Persson, 22, participated in her second Olympics in Beijing and views it as a stepping stone for the team.

“Our goal was to get to the quarter-final, and we managed that… I think it was a really good experience for the younger girls to see what it takes, how we need to play to be able to compete with the best teams in the world,” she said.

Sweden will now take those lessons into this year’s world championship, where they will face some of the same teams. They’ll compete in Group B along with Czechia, Germany, Hungary, and the hosts, Denmark.

“We know we have to play with consistency,” Lundberg said. “The latest medal was in 2007. The goal of this journey when we started is to reach back to that level, to play [for] those medals again.

“We have a goal to get to the quarter-final. But I said I also want to reach high. We have a chance to win that group. We have to believe in in what we do.”