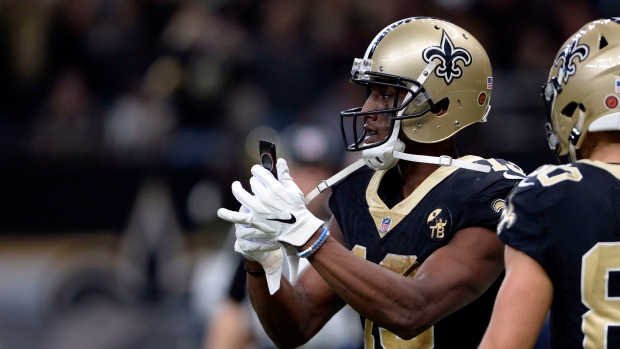 While they will both have tests on Monday, the injuries suffered by Michael Thomas and Jarvis Landry do not appear to be serious, according to NFL Network insider Ian Rapoport.

Both will have tests today, but based on the initial diagnoses , it doesn't appear that injuries to #Saints WRs Michael Thomas (toe) and Jarvis Landry (foot) are serious. Landry is dealing with soreness, while for Thomas, it's not the same foot as his previous ankle injury.

The 29-year-old Thomas, who missed the 2021 season in its entirety due to an injury, was downgraded to questionable in Sunday's contest with the Carolina Panthers. The Los Angeles, Calif., native finished the game with five receptions for 49 yards.

A product of The Ohio State University, Thomas has played six seasons with the Saints (2016-present), recording a career 526 catches for 6,121 yards and 35 touchdowns. Thomas has earned multiple accolades including a trio of Pro-Bowl nods (2017-19), back-to-back All-Pro honours (2018-19), was named Offensive Player of the Year in 2019 and was named to the All-Rookie Team in 2016.

Landry, 29, was also downgraded to questionable in Sunday's game against the Panthers.

Landry hauled in four receptions for 22 yards in just his third game with the Saints after signing with them in free agency following four seasons with the Cleveland Browns (2016-21).

A second-round selection of the Miami Dolphins in 2014 (63rd overall), the Metairie, La., native played four seasons in Miami, making Pro Bowls in three of them, before being traded to the Browns, where he would make two more.

The Louisiana State University product has tallied a career 701 receptions for 7,759 yards and 37 touchdowns.

The Saints (1-2) take on the Minnesota Vikings in Week 4 at London's Tottenham Hotspur Stadium as part of the NFL International Series.