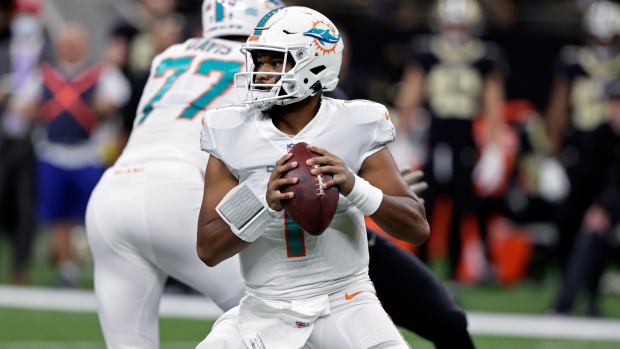 Tagovailoa was listed on Monday's injury report to be dealing with both an ankle and a back injury, injuries that McDaniel said were causing him 'pain' and 'stability' issues. The quarterback also faces a limited timeline for recovery with the short week ahead.

"It's a tricky scenario, luckily it's one of the reasons we feel so fortunate to have Teddy," said McDaniel. "But if this were an actual real practice on a normal week, Tua would be limited and he would be questionable for the game.

Tagovailoa appeared dazed after taking a hit in the first half of Sunday's win over the Buffalo Bills, but returned for the second half. He said after the game he was dealing with a back injury and not a concussion.

"It's the functionality of it because all of a sudden your back is overly tight or you feel that crazy pain; your body has a reaction process," McDaniel added of the injury. "You can all of lose your the power in your throws, you can't redirect and once you can't protect yourself on an NFL football field, we have to protect you.

"...There will be some pain regardless, it's whether or not that pain hurts him from being able to put his production on the field and escape impending danger which is the part of the job an NFL quarterback on Sundays or Thursdays."

McDaniel said that he'd like to make a decision on Tagovailoa's status Wednesday.