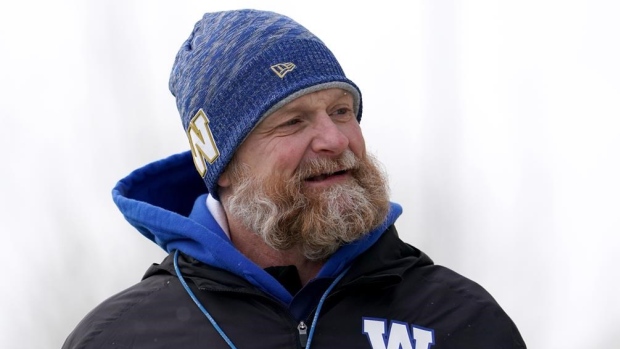 WINNIPEG — Wade Miller knew he was talking to a winner when he first interviewed Mike O’Shea in 2013.

The Winnipeg Blue Bombers president and chief executive officer told the story at a press conference Friday, where he and O’Shea talked about the three-year contract extension the head coach had recently signed through the 2025 season.

That first interview took place with Blue Bombers general manager Kyle Walters in the Toronto airport, a city where O’Shea had been the Argonauts’ special teams co-ordinator for four seasons.

“We opened the door for the interview and he said, ‘Should we put on some (football) face masks for this meeting?’” Miller said of O’Shea. “And then it started from there.

“The three of us had a very good conversation. Within the first 15 minutes you knew. You knew this was the person that was going to come and be the leader of this team for a long time. That was very evident, very quickly.

“He didn’t show up with some PowerPoint presentation and talk about leadership. He is a leader. So, that’s where it started.”

A former star linebacker, O’Shea was named to the Canadian Football Hall of Fame in 2017 after a 16-year playing career with Toronto and Hamilton that saw him earn three Grey Cup rings. He also won the league’s top rookie award in 1993, was the most outstanding Canadian in 1999 and a five-time division all-star.

The 52-year-old won his second consecutive Annis Stukus Trophy as the CFL’s top coach this year after leading the Bombers to a club-record 15 regular-season wins.

He was asked why he didn’t seek a new challenge elsewhere.

“I don't think we're done yet,” O’Shea replied. “I think that the group that we have here, now there's always additions and subtractions every single year, it's pro sport, but the group we've assembled, the group that's all thinking the same way, believe that we've got a lot of legs left in this so it would be fun to be a part of.”

It was the fourth three-year contract the North Bay, Ont., native has signed with the club since he was hired on Dec. 4, 2013.

His contract gives him the opportunity to become the franchise’s all-time leader in career coaching wins, surpassing Bud Grant (102) and Cal Murphy (86).

He said that hasn’t crossed his mind for one second.

“There’s guys that spend their careers worrying about their legacy,” O’Shea said. “I think that’s ass-backwards. You work hard every day and then somewhere down the road somebody else tells you what that is.”

O’Shea is the league’s longest-serving head coach, but said that’s “just a number.” He attributed his longevity to Walters and Miller’s belief in the value of continuity.

O’Shea’s teams went 7-11 in 2014 and 5-13 the following year, but have since posted six seasons with double-digit victories that matches a franchise-best stretch from 1957-62.

Since the season ended, he was approached by fans telling him they wanted him to continue at the helm.

“It’s not hard to sense that,” O’Shea said. “Just being out and about on a more regular basis, just doing regular stuff that dads and husbands and everybody else does, you hear it a lot when you’re out.

“So it’s all very appreciated, it really is.”

Quarterback Zach Collaros is also signed through the 2025 season, a year the Bombers want to host the Grey Cup.

This report by The Canadian Press was first published Dec. 9, 2022.