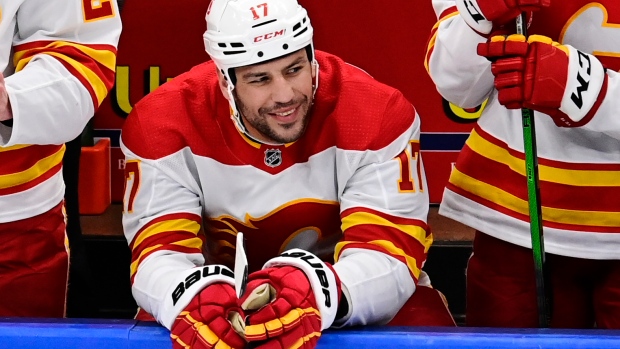 Arenas were minus fans because of the COVID-19 pandemic when Lucic played his career 1,000th on April 13, 2021 in Toronto, and also when the Flames held an on-ice ceremony for him and his family at the Scotiabank Saddledome six days later.

The 34-year-old from Vancouver reached another longevity benchmark Thursday when the Flames were at home to the Buffalo Sabres.

"Feels like it wasn't too long ago, where we were celebrating 1000," Lucic said before Thursday's game.

"You think about it as a whole from 2007 to now, how fast it goes and all that type of stuff.

"What was I? 355 or three something in there when I hit a thousand and now that number shrinks to 211. You see when you climb up in games, how those numbers shrink and only a certain amount of players end up getting to that plateau.

"That's another thing that I guess is pretty cool and you're pretty grateful about."

Among active NHL players, Dallas Stars defenceman Ryan Suter is the leader in games played with his 1,284th in Toronto on Thursday, followed by Washington's Alex Ovechkin suiting up for his 1,279th in Ottawa.

Lucic is a fan favourite at the Saddledome where "Looooch" erupts like a foghorn every time he touches the puck or delivers a heavy check with his six-foot-three, 240-pound frame.

The Flames acquired him from the Oilers in exchange for James Neal in the summer of 2019. Lucic is in the final season of a seven-year, $42-million contract Calgary inherited from Edmonton.

He wants to play hockey "as long as I can," he said. "The goal is to live it day by day and play for as long as you can.

"I've had a good start to the year so far. The legs and the body are feeling well and I'm able to contribute to the team."

Lucic is an intimidating presence on Calgary's fourth line alongside Brett Ritchie and newcomer Kevin Rooney.

That trio was instrumental in Calgary's third straight win to open the season.

Their tenacity dragged the Vegas Golden Knights into penalty trouble in the second period, when the Flames scored two power-play goals in a 3-2 win Tuesday.

"We're going out there to try and help the team and try to make a difference every time we get a shift," Lucic said.

"We're keeping things simple, playing straight lines, using our size and mobility and get that working in the o-zone."

This report by The Canadian Press was first published Oct. 20,2022.