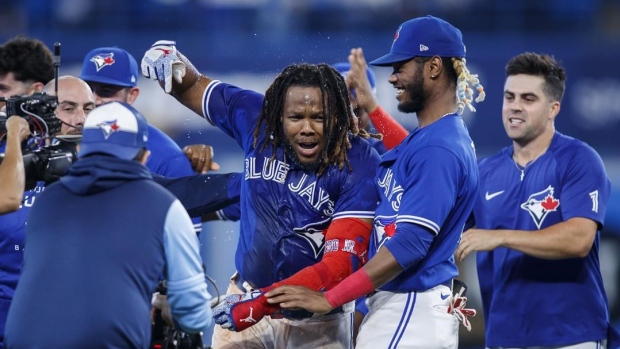 BALTIMORE — It hasn’t been without its ups and downs, but this is where most loosely expected the Toronto Blue Jays to be when the season began some six months ago.

Now, with a postseason berth locked up and homefield in the opening round wild-card series looking likelier by the day, the Jays internally feel like they’re well-positioned to make a run.

Taking care of their remaining business this week in Baltimore will help further that case, as there are a number of storylines to pay attention to as the regular season winds down.

Here are five questions the Jays will have to answer this week.

1—Can they secure homefield this weekend?

With a postseason spot officially clinched a few days ago, the Jays turned their attention to homefield advantage, promptly sweeping the Boston Red Sox to take a stranglehold on the situation.

The math is pretty simple at this point.

Heading into Monday’s series opener against the Orioles, the Jays’ magic number to secure three games at the SkyDome this weekend is just two.

With Tampa Bay now out of the mix when it comes to a potential first-round roadie, the only place the Jays could head other than back home is Seattle, who hold a game in hand.

The Mariners get the 65-win Detroit Tigers at home for four games this week, including a double-header on Tuesday that may decide their first-round fate.

2—How do they line up the starting pitching for the wild-card series?

Currently, stud right-hander Alek Manoah is lined up to start Wednesday’s regular-season finale at Camden Yards, but no one actually expects him to take the ball that day.

If the Jays have their way, they’ll lock up homefield prior to Wednesday and then simply push Manoah back to Friday.

That would send Kevin Gausman into Saturday’s Game 2 of the wild-card round with an extra day of rest, which could be beneficial for the 31-year-old right-hander, who left Sunday’s start with a right middle finger laceration.

From there, Jays brass would have a decision on their hands: Jose Berrios or Ross Stripling in Game 3?

Interim manager John Schneider hinted Monday that the club knows which direction they’re going to go, but added it’s nice to have options.

The Jays say no, and Gausman says no, too.

Good to go, everyone says.

Finger issues are nothing new for Gausman thanks to his splitter’s torque, but it’s obviously a concern when your co-ace leaves his final regular-season start after just three innings.

“In a different situation, even if this was two weeks prior, I’m staying in that game,” Gausman said after the game. “With the postseason coming up, I didn’t want it to get any worse.”

The finger may be good to go now, but the prospect of it happening again isn’t a good one for the Jays and it has the potential to alter their weekend pitching plans in a heartbeat.

The smart play may be having Ross Stripling available out of the bullpen just in case.

Gausman was fantastic in his first season of the five-year, $110-million deal he signed last winter, posting a 3.35 ERA across 31 starts.

4—Can Gurriel and Espinal make it back in time?

Gurriel, who has been out since Sept. 7 with a left hamstring injury, plans to run the bases Tuesday at Camden Yards — weather permitting — and go from there.

While Schneider said his left fielder is making good progress and hopes to have him available this weekend when the postseason begins, Gurriel himself admitted he might only be available in a pinch-hitting role to start.

After nearly a month off, it’s going to be hard to fully trust a rusty LGJ both defensively and in the box during a short series, but having his righty bat available off the bench might be better than nothing.

With Whit Merrifield enjoying his most productive stretch as a Blue Jay, the situation is similar for Espinal, who has been sidelined for a couple weeks with a left oblique injury.

Schneider is hoping to have Espinal hit on the field in Baltimore this week, but his postseason role may be limited to defensive replacement if he’s on the roster.

5—Who’s going to be left off the postseason roster?

With September rosters at 28, not everyone currently riding Schneider’s pine will be making the roster for the wild-card series this weekend.

If Gurriel and/or Espinal aren’t deemed ready to go, that eliminates most of the questions, but if they are there will be some minor decisions to make.

On the bench, third-string catcher Gabriel Moreno and infielder Otto Lopez would be the easy subtractions if the aforementioned pair are healthy.

With the pitching staff once again capped at 13, long relievers Mitch White and Yusei Kikuchi are at risk of being left off the roster and there’s a chance the Jays could decide to go with a longer bench, leaving both off in the end.

If that’s the case, Schneider’s bench options would include Cavan Biggio, Jackie Bradley Jr., Bradley Zimmer, as well as potentially Gurriel and Espinal.