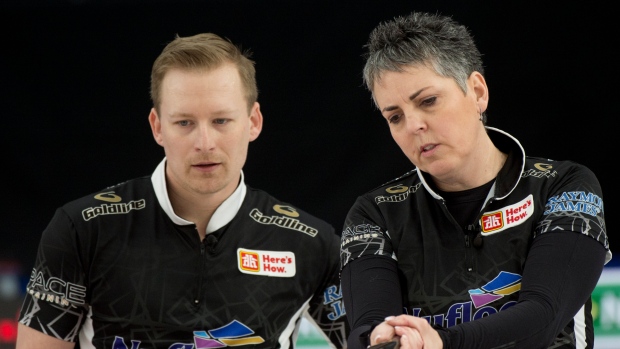 The mixed-doubles duo of Nancy Martin and Tyrel Griffith won the Aly Jenkins Memorial this weekend against a very tough field in Saskatoon.

🎬 That’s a wrap for The Aly Jenkins Memorial Mixed Doubles Classic at The Sutherland Curling Club in snowy Saskatoon!! ❄️ Congratulations to @teamgrif_martin on their victory and to @walkermuyres on a great weekend making their second MD Super Series final! pic.twitter.com/OKF9KhqEE1

The tandem out of Saskatoon, Sask., went 7-1 over the four-day bonspiel, highlighted by an 8-5 win over Edmonton's Laura Walker and Kirk Muyres in the championship game. Martin and Griffith only scored in two ends, but put up four spots in the third and seventh ends on their way to the victory.

The Aly Jenkins Memorial had other notable duos competing, including Ottawa's Rachel Homan and Brad Jacobs, who lost to Walker-Muyres in the semifinal, as well as Toronto's Lisa Weagle and John Epping, who fell to Homan-Jacobs in the quarters.

Good weekend in Halifax at the Mayflower cc with the new #PEI squad. First spiel and first trophy. Thanks to @BalancePlus_ for the gear.

And no i didn’t shrink, Burgess is just an animal. #curling @peicurling #litespeed pic.twitter.com/rmj40jxJRP

On the women's side, Team Sarah Murphy defeated Team Taylour Stevens in the final.

Heather Strong won the women's event after a close 8-7 win over Mackenzie Mitchell in the final.