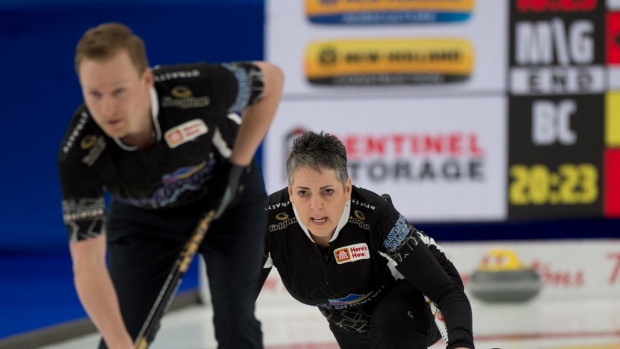 Saskatoon's mixed doubles team of Nancy Martin and Tyrel Griffith continued their strong 2022-23 season with another win on Tour this weekend.

Martin and Griffith went a perfect 7-0 at the Service Experts Shootout in Leduc, Alta., topping the All-Star duo of Kerri Einarson and Brad Jacobs in the final, 10-2.

That's a wrap! Congratulations to our @serviceexperts Shootout Champions @teamgrif_martin! Thank you to our event sponsor Service Experts Heating & Air Conditioning and to our hosts @LeducCurling on a great third stop on the Mixed Doubles Super Series! 🥌🥌 pic.twitter.com/lqQift20fE

They scored three in the first end with hammer and stole three more in the next end before putting up a four-spot in the fifth to finish the game.

Martin and Griffith also defeated Switzerland's Jenny Perret and Martin Rios, who won silver at the 2018 Olympics in South Korea, in the semi-final by a score of 8-4.

Earlier this month, the duo won the Aly Jenkins Memorial and also captured a bonspiel in Martensville, Sask., back in mid-September.

Other notable teams included Lisa Weagle and John Epping, who lost in the other semi-final as well as Jennifer Jones-Brent Laing, Shannon Birchard-John Morris and Laura Walker-Kirk Muyres, all coming up short in the quarterfinals.