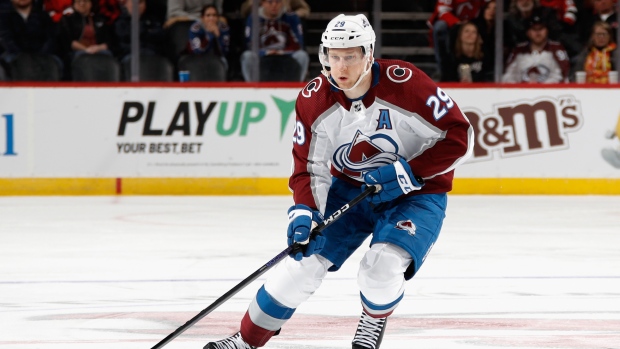 Colorado Avalanche forward Nathan MacKinnon left Monday's game against the Philadelphia Flyers with an upper-body injury and did not return.

Nathan MacKinnon has left the game with an upper body injury and will not return.

He left the game in the first period and did not come back out for the second.

The team did not say how MacKinnon sustained the injury but he appeared to be in some discomfort after blocking a shot as well as a hit from Scott Laughton of the Flyers along the boards.

After the game, head coach Jared Bednar did not have an update on MacKinnon, telling reporters more medical evaluation was required to determine his status.

He had one shot in just under five minutes of ice time before exiting as the Flyers went on to win the game 5-3.

In 22 games so far this season heading into Monday's matchup, the two-time All-Star has eight goals and 25 assists for 33 points.

Following their matchup with the Flyers, Colorado will be back in action on Wednesday at home against the Boston Bruins.