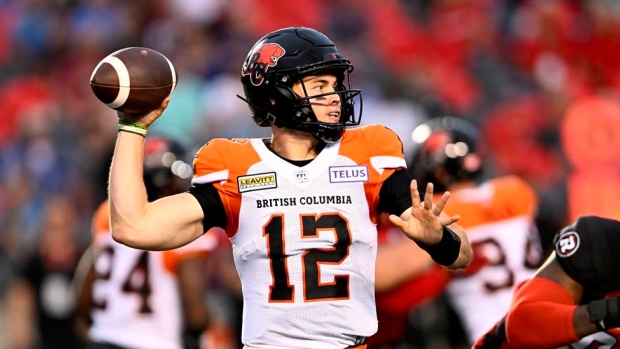 Quarterback Nathan Rourke, the reigning Most Outstanding Canadian of the CFL, is scheduled to visit with the Jacksonville Jaguars on Monday and Denver Broncos on Tuesday, per ESPN's Adam Schefter.

CFL QB Nathan Rourke met with the Raiders last week, is visiting with the Jacksonville Jaguars today and is scheduled to visit the Denver Broncos on Tuesday.

Rourke met with the Las Vegas Raiders on Friday, Dec. 2.

The 24-year-old dazzled in his sophomore season with the BC Lions. The BC-born, Ontario-raised product threw for 3,349 yards with 25 touchdowns and 10 interceptions over just 10 games in 2022 after missing significant time with a Lisfranc injury to his foot.

Rourke returned in time for the Lions' Western Semi-Final tilt with the Calgary Stampeders. He threw for 321 yards and two touchdowns to win his first-ever postseason game against fellow second-year slinger Jake Maier.

The following week, Rourke faced off against two-time defending Most Outstanding Player Zach Collaros and the Winnipeg Blue Bombers. Rourke threw for 300 yards, a touchdown and two interceptions, but the Bombers prevailed to advance to a third-straight Grey Cup, where they would fall to the Toronto Argonauts.

Post-game, Rourke spoke about his future with the Lions and the CFL.

"I don’t know. I’d sure like to be, the way I’m feeling right now," Rourke said of returning to the Lions.

That said, Rourke let it be known he was interested in opportunities south of the border.

"I don't know how many people know, but I've never had a true opportunity at the NFL level, not not as a quarterback," Rourke added. "And that's been something that I've wanted to, at least, try for a very long time. And I'm fortunate enough to have an opportunity and try to see where that goes. And understanding that I have a heck of an opportunity still here with the Lions. And so to me, it's a win-win.

"If I get an opportunity down there, then great but, it's a great thing that I have here, and I don't mind coming back at all. (I'd) be very excited to, in fact."

The Broncos season has been a disaster after they traded for Russell Wilson of the Seattle Seahawks, and the Jaguars had an injury scare to their starter Trevor Lawrence in their defeat against the Detroit Lions on Sunday.