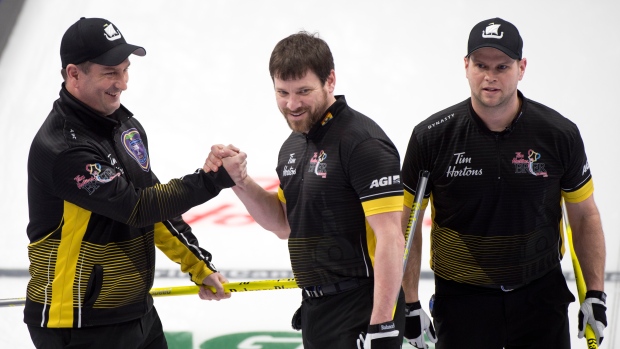 New Brunswick curler Jamie Brannen has passed away suddenly at the age of 47.

"It's been an emotional 24 hours for our team. We are shocked and in disbelief with the news that our teammate and friend has passed away suddenly," Team James Grattan said in a news release on social media on Saturday . "We want to thank everyone for the outpouring of support we have received from across the country, it has been overwhelming."

Brannen, who curled out of the Capital Winter Club in Fredericton, N.B., made six appearances at the Tim Hortons Brier in his curling career, including three as a member of Team Grattan in 2020, 2021 and 2022. He also made two Brier appearances as a lead on Mike Kennedy's rink in 2016 and 2017 as well as in 2019 as an alternate for Terry Odishaw.

"Jamie Brannen was the heart and soul of our team for almost five years. He was our friend and brother and we were lucky to have him as part of our team. Jamie impacted so many in the curling world with his energy, his humour and his intensity. He was a class act and he has always made his teammates better players and more importantly better people," Team Grattan said in the release. "While we are heartbroken and devastated by his passing, we are going to put our full energies in supporting his family and his community during this time. Lesley, Julie and Alex you are in our thoughts. Jamie - We love you brother and you will be missed by all of us tremendously."

There are only a few words. Devastated. Shocked. Heartbroken. My thoughts are with Lesley, Julie. Alex and their entire family. 💔 https://t.co/7zI3igv4zp pic.twitter.com/hT2SRp6L8v

"He was Jamie's biggest fan and by extension ours. His quiet advice and post game consults will be missed greatly by our team. Curling teams become families and our team has lost a big piece of ourselves today. Bob-Jamie. We love you."

Our deepest condolences go to Jamie Brannen's family and friends as well as the entire curling community in New Brunswick. pic.twitter.com/9Hcced3I7J