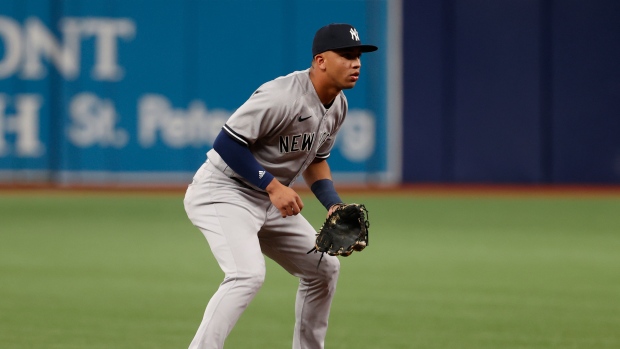 “Who thought we'd be in this position a couple days ago? Anything’s on the table, certainly,” Yankees manager Aaron Boone said. “These are guys that are talented players that have a chance to come up and do something important to help us win these important games."

Rizzo was placed on the IL retroactive to Saturday due to headaches that followed an epidural injection to treat lower back pain. Boone said Rizzo was told to rest until Thursday before the medical team decides the next step.

“If he's symptom free, then we can start ramping him up,” Boone said.

New York selected the contract Guzmán from Triple-A Scranton/Wilkes-Barre, recalled García from the RailRiders and brought up Andújar from Scranton and designated him as the 29th player for the doubleheader. Right-hander Luke Bard was designated for assignment.

Stanton, who fouled a ball off his left foot Monday, and LeMahieu, slowed by inflammation of his right big toe, might be available for the second game against the Twins.

Left-hander Zack Britton, recovering from Tommy John surgery last September, was moved up to Scranton after making three appearances for Class A Tampa.

Right-hander Luis Severino, eligible to be activated next Monday, had his rehab assignment transferred from Tampa to Double-A Somerset.

Carpenter had X-rays Tuesday on his left foot, broken by a foul ball on Aug. 8. The scan showed partial healing and he will remain in a boot and have imaging again in 10-to-14 days.