Give Kyle Dubas his flowers. And, unfortunately for my wallet, I may be the one buying the bouquet.

We are two months into the regular season, and though there is still time for this to change, what the Toronto Maple Leafs are yielding from a ragtag goaltending tandem has been impressive. Considering the sizable pressure on the Maple Leafs front office to deliver a Stanley Cup contender that can advance beyond the first round of the playoffs, banking on an injury-prone underperformer in Matt Murray and an unknown in Ilya Samsonov was risky.

What’s interesting about Toronto’s decision to dress Murray and Samsonov behind an otherwise talented lineup is that much of it was born from economic headwinds within the league. The league’s slowed salary cap growth, stemming from the COVID-19 pandemic, pinched a number of top-spending teams, including Toronto. Combine that with a weak summer goaltending market, and Dubas’ options were limited.

Considering their skating talent advantage over most teams in the league, the Maple Leafs didn’t need the Murray-Samsonov tandem to be anything more than average – at least during the regular season. But even managing through injuries, it has held up incredibly well. 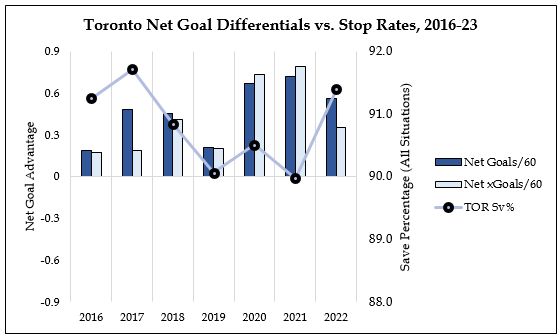 This has been a dominant regular-season team for years now but look at how divergent Toronto’s save percentage this season is with their broader performance. If the Maple Leafs had this goaltending (at the team level, their stop rate grades as sixth best in the NHL) during the 2020-21 or 2021-22 seasons, backstopping an otherwise dominant lineup, we are talking about those teams as Presidents’ Trophy contenders.

One thing I always caution about when it comes to save percentage: it is heavily influenced by the team’s broader defensive prowess and structure, as well as playing style. Teams with heaps of great defensive forwards reticent to play a transition game generally see fantastic team-level save percentages, irrespective of the talent of the goaltender in net, a la the Boston Bruins.

Teams like the Vancouver Canucks, whose skating talent skews heavily towards attacking forwards and whose weakness is on the blueline, require some miracle work from their goaltenders to save the day.

So, how do we decouple save percentages from individual goaltending performance? In the public sphere, we can use expected goal rates based on shot volumes and the quality of shots faced to assess how much production a goaltender is creating. Elite goaltenders, like Winnipeg’s Connor Hellebuyck, consistently show as erasers of goals against here. Platoon and backup types, the opposite.

Here is how each team’s goaltending situation looks through Saturday’s games, and in this case, we will draw our focus to Samsonov and Murray. Samsonov has erased seven goals from the Toronto ledger already, which puts him eighth best in the NHL. Murray has been utilized a bit less, but in his seven appearances he’s been five goals better than expected, good for 13th in the NHL. 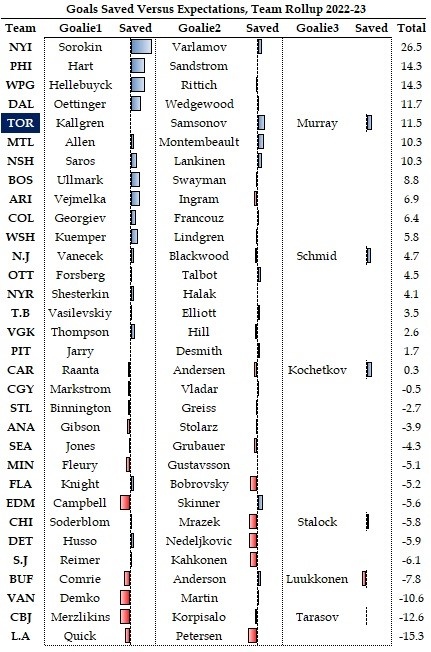 Because of Murray’s downtime with injury, Erik Kallgren has earned a surprising number of early-season starts and has been adequate in relief. With Murray back healthy, Kallgren’s minutes will dwindle. But more to the point: the trio of goaltenders Toronto has leaned on have erased more than 11 goals from the team’s defensive numbers when adjusting for volumes and quality faced, which is fifth best in the league.

I still think there is plenty of risk with this group – one of the factors we talked about was Murray’s inability to stay on the ice early in his career, and that’s already materialized in Toronto. But we live in a binary world where wins and losses are ultimately the only thing that matters.

And if you are going to ridicule general managers when decisions unexpectedly go sideways, you must also acknowledge when there is an upside surprise like this.

Dubas’ bet, at least so far, is paying off.