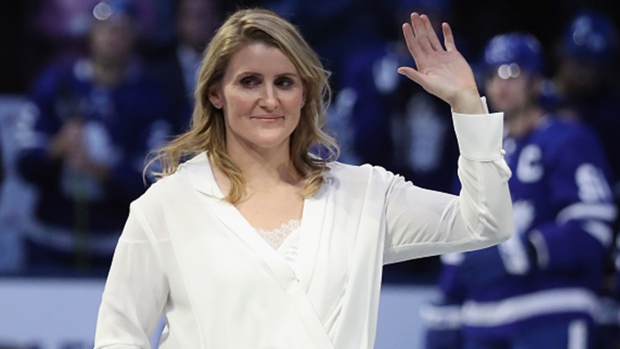 The ones off to the side, away from fans and media, where they get the opportunity to pick the brain of one of hockey's best-ever talents.

Hayley Wickenheiser joined the Toronto Maple Leafs in a player development role four years ago, and after a promotion within the department in 2021, the four-time Olympic gold medallist with the Canadian women's national team was named one of the club's assistant general managers in July.

"She's been awesome, somebody that I've leaned on for advice," Matthews said at last month's NHL/NHLPA player media tour. "That promotion … she deserves it. Her knowledge and her experience brings lots to the table — not just myself, but for prospects, for guys that are getting drafted.

"She's been through a lot in her career and has experienced a lot," Toronto's star sniper added. "It's cool to get her perspective on different things."

Women have been hired in the NHL with increased regularity in recent years, but the game has seen a real push into positions of power over the last 12 months.

The Vancouver Canucks have a pair of female assistant GMs in Emilie Castonguay and Cammi Granato, the Chicago Blackhawks promoted Meghan Hunter, and the New Jersey Devils did the same with Kate Madigan. Angela Gorgone, during the 1996-97 season, is the only other woman to hold the role in league history.

It's taken some time, but the NHLers of today's game see an even brighter future for women.

“And they're getting it now.”

Rielly said Wickenheiser's promotion to assistant GM was a no-brainer in Toronto.

"Amazing experience in sport and extremely deserving," said the Leafs defenceman. "It's an awesome opportunity for her to prove that gender is not important. It's about if you're capable of doing the job.

Matthews said having Wickenheiser, who's also a medical doctor and Hockey Hall of Fame inductee, has been an important resource.

"She's very calm, cool, collected," said the reigning Hart Trophy winner as NHL MVP. "Easy to talk to and lean on for different things, whether it's on the ice, off the ice, pressure. She's somebody that's been through a lot and has experienced quite a bit.

"It's unique to have somebody like that within the organization."

The NHL has never had a female GM or head coach — the Washington Capitals hired Emily Engel-Natzke as the league's first female assistant when she joined Peter Laviolette's staff this summer — but as the sport moves forward, it feels like that time is coming.

"It's going to be a cool moment," New York Islanders centre Mathew Barzal said. "Hopefully I'm still playing when something like that happens."

"Probably not that far (off),” said Canadiens captain Nick Suzuki, before adding of Poulin: "Awesome ever since she joined the organization. It's cool to just speak to her about her experiences. She's probably the best women's player and she's done so many things. It's great to just learn off her."

NHL deputy commissioner Bill Daly said the influx of women is good for the league.

"It seems like every morning I read about the next person hired who, five years ago, you wouldn't have thought ever would have an opportunity. It's a positive thing for the sport, and I expect that it'll continue."

Vancouver Canucks defenceman Quinn Hughes, along with younger brothers Jack and Luke, had a strong influence in the game growing up through their mom, former U.S. national team member Ellen Weinberg-Hughes.

He said gender shouldn’t matter when it comes where the jobs go.

And Rielly said the list of qualified candidates is a lot longer than the six women currently occupying assistant coaching or GM roles across the NHL.

"There are tons of women that are capable," he said. "Hopefully there will be more opportunity out there."