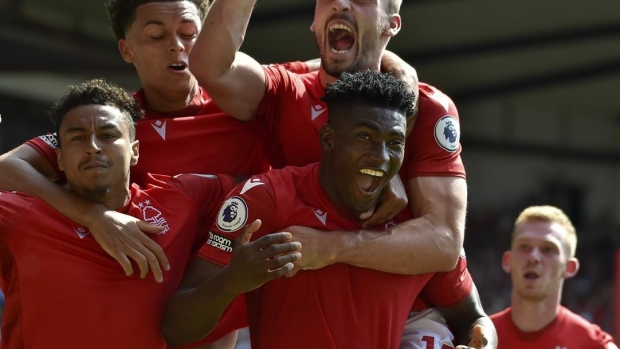 NOTTINGHAM, England (AP) — Nottingham Forest rode its luck before marking its first home game in the Premier League in 23 years with a 1-0 win over West Ham on Sunday.

A scrappy goal by offseason signing Taiwo Awoniyi in first-half stoppage time settled a match played in a party atmosphere at the City Ground, earning Forest its first points since returning to the top flight.

However, West Ham’s players will wonder how they left without at least a point.

Declan Rice had a 65th-minute penalty saved by on-loan Forest goalkeeper Dean Henderson, Pablo Fornals and Said Benrahma both hit the underside of the crossbar with long-range shots in the second half, and Benrahma had a goal ruled out after video review late in the first half.

Then there was the stunning save by Henderson to deny Tomas Soucek and the goal-line clearance by the scrambling Neco Williams to keep out Kurt Zouma's header in the 83rd minute as West Ham pressed relentlessly for an equalizer.

While West Ham has now opened with back-to-back losses, Forest is off the mark after starting its first season in the Premier League since 1999 with a 2-0 loss at Newcastle last weekend.

Forest has made 12 signings since getting promoted and two of them were involved in the only goal.

Jesse Lingard, who joined after being released by Manchester United, sent in a weak shot on goal that struck the outstretched foot of West Ham defender Ben Johnson. The ball ricocheted onto Awoniyi’s leg and bounced into the net.

The goal came five minutes after Benrahma thought he had given West Ham the lead by slotting home a finish from Rice’s through-ball. However, VAR spotted that Michail Antonio had bundled into Orel Mangala off the ball as he ran toward the area in support.

The second half mostly belonged to West Ham and the best chance for an equalizer fell to Rice, after a penalty was awarded following a handball by Scott McKenna as the defender dived to block Soucek’s goalbound shot.

Henderson guessed correctly, diving to his right to save Rice’s low effort, and blew a kiss to the crowd with one hand as he held the ball in the other.