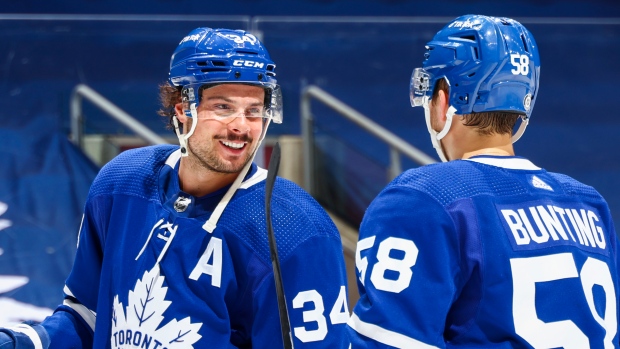 After a trying month of October, the Toronto Maple Leafs are starting to climb the NHL standings.

It hasn’t always looked pretty, and the team is still tinkering with the lineup – partly to build chemistry, partly to paper over some injuries (especially on the blueline and in goal) that have thrown a curveball the way of general manager Kyle Dubas and head coach Sheldon Keefe.

The team’s improvement during November has been notable, banking an impressive number of points – their 9-1-3 record over this stretch is second to only the New Jersey Devils. The team is rolling right now, but recall the prior month of play, where the Maple Leafs finished 23rd in net goal differential (-3). Some good, some bad, and it’s generally still a work in progress.

One of the areas of discussion over a volatile first two months has been the play of Auston Matthews, the defending Rocket Richard and Hart Trophy winner. Matthews is in the throes of a relative scoring slump – he has 10 goals in 23 games, great for most attackers, but a far cry from his historical averages.

I remind you that we have been here before. Like, one season ago.

On Nov. 17, 2021, I wrote about Matthews’ scoring rates being curiously quiet despite otherwise dominant play. The underlying numbers were so awesome that a breakout felt inevitable. That breakout materialized a handful of days after the piece ran, and Matthews would go on to score a whopping 60 goals.

Slumps happen for every calibre of player, and it’s critically important to understand what’s underpinning that slump. Is there an injury or explainable reason for a performance drawdown, or is a player being victimized by poor fortune over a smaller sample size?

One of the ways I like to tease out whether a player is struggling or on the precipice of a breakout is to see how dangerous they are on the attack.

You can analyze danger any number of ways – for high-end attackers, it’s critically important to see high shooting volumes from dangerous areas of the ice, which include the net mouth, the low slot, and between the circles. If you are checking those boxes and not seeing the goals, you’re either a very poor shooter of the puck or you’re overdue.

Look at the below career game log for Matthews, which shows how well scoring rates and expected scoring rates move in lockstep. Any divergences between the two is relatively short-lived, and we sure as day have another divergence right now:

Goal scoring is extremely unpredictable – the greatest snipers in hockey history, including Washington’s Alexander Ovechkin, can see wild swings in production over smaller stretches of games.

Matthews may not have the longevity of Ovechkin, but he’s certainly in his class when it comes to finding the back of the net, and what you are seeing in terms of production this season is what we have seen from Matthews during stretches of the 2018-19 season and the 2021-22 season.

But look at expected goal rates for Matthews. Though it is sliding intra-season, it is well above his historical averages – the same historical averages that have allowed him to average 51 goals per 82 games over the course of his career. So long as the ice time remains elevated, and the team doesn’t make any foolish lineup changes – Matthews is playing most of his minutes with Michael Bunting and William Nylander right now – I expect his shooting percentage (10 per cent) to regress quickly towards his career averages (16 per cent).

On the lineup point: Matthews isn’t a one-man band, though he could be on most teams. The Matthews line as a whole remains eminently dangerous, especially at five-on-five. This is the type of offensive dominance that puts so much pressure on defences and goaltenders.

Sometimes Toronto’s playmaking will win the day – other times, it’s breakdowns to the opposition’s structure that will create the scoring sequence. At any rate, Matthews and his impact to the threat level of his linemates is significant. 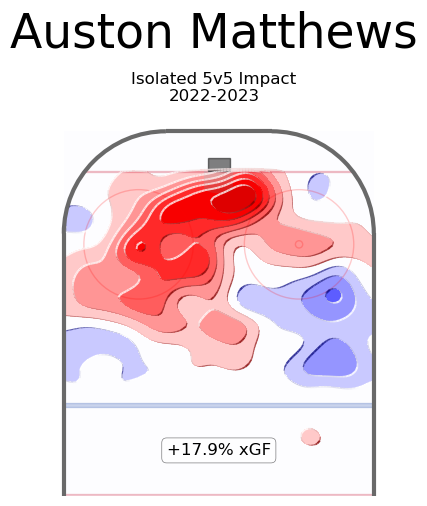 There’s nothing scientific or exact about hockey. We talk in likelihoods and probabilities. Considering what we know about Matthews’ game and the underlying performance numbers for the first two months, the chance of a scoring surge – much like last season – remains high.

This is an instance where patience will prevail.