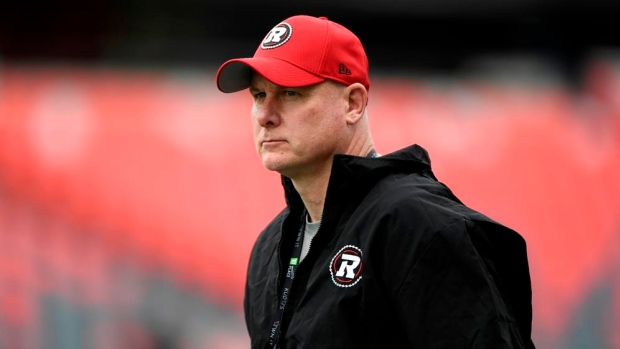 The move comes after Ottawa dropped a 34-19 decision Friday night to the B.C. Lions. The Redblacks have lost three straight games and sport the CFL's worst record at 3-11.

"I have enjoyed working with Paul and thank him for his contributions to this team over the past two seasons; today isn't an easy day," Redblacks GM Shawn Burke said in a statement. "In this business, sometimes a change is required to help move a team forward and that's what we've done here.

"We're fortunate to have a coach of Bob Dyce's calibre and experience able to step up and take on this role."

LaPolice was in his second season as Ottawa's head coach, having registered an overall 6-22 record with the CFL club. He was hired in December 2019 after serving as the offensive co-ordinator of the Grey Cup-champion Winnipeg Blue Bombers but didn't take to the field until 2021 as the league didn't play in 2020 due to the COVID-19 pandemic.

"Paul is an excellent man who has put everything he has into this job," said Mark Goudie, the president/CEO of Ottawa Sports and Entertainment Group, which owns the CFL club. "But, unfortunately, we haven’t won nearly enough games.

"We are committed to getting back to what RNation deserves which is exciting and winning football."

LaPolice, 52, was in his second stint as a CFL head coach, having served in that capacity with Winnipeg (2010-12). He compiled a 16-28 record with the Bombers for an overall mark of 22-50 over five campaigns as a head coach in the league.

Over his previous four seasons as a CFL head coach, LaPolice's teams had made the playoffs just once. The Bombers reached the 2011 Grey Cup game before losing 34-23 to the B.C. Lions at BC Place Stadium.

Despite its record, Ottawa remains in playoff contention in the East Division. The Redblacks enter action Saturday trailing second-place Montreal (6-7) by six points and are just two points behind third-place Hamilton (4-10).

The Alouettes visit the Edmonton Elks on Saturday night while Hamilton is idle.

Ottawa went 3-11 in LaPolice's first season as head coach. But optimism was high in the Canadian capital this year after Burke, in his first season as GM, made a number of off-season moves, including signing free-agent quarterback Jeremiah Masoli.

Ottawa opened the season with three straight defeats before Masoli suffered a serious knee injury in a 28-13 loss to the Saskatchewan Roughriders on July 8. The 34-year-old American has been sidelined since.

And the Redblacks offence, under LaPolice's guidance, has struggled mightily with consistency. The unit is ranked last overall in offensive points (19.5 per game) and offensive TDs (21).

Ottawa has also been winless at home (0-6) and is 2-4 within the East Division this season.