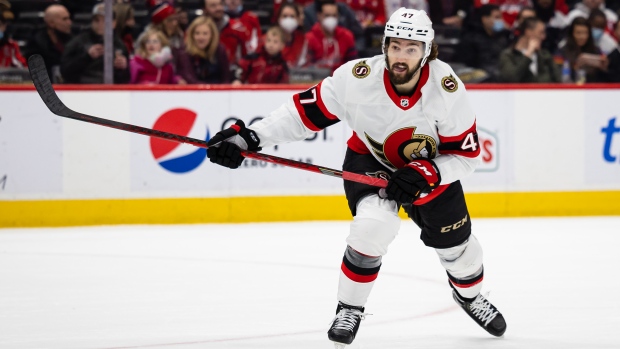 In the eyes of Ottawa Senators head coach DJ Smith, forward Mark Kastelic is knocking on the door of earning a spot with the big club out of training camp.

"It's going to come right down to the end for him and it's a matter of how many minutes we can get him," Smith told the media. "He's going to play in the National Hockey League. He's too big, he's too strong and his will's too good."

Kastelic, 23, is coming off a 14-goal, 28-point season in the AHL with the Belleville Senators. He made his NHL debut on Jan. 29 against the Anaheim Ducks and scored his first two NHL goals against the Montreal Canadiens on April 23. In 16 games with Ottawa, he had two goals and four points.

As Kastelic heads into his third professional season, Smith envisions a long NHL career for the Phoenix, Ariz., product, who at 6-foot-3 and 210 pounds, could bring more size to the Senators.

"He puts his entire time and effort into his conditioning and his craft," said Smith. "He was an overager that got passed over in the draft. You love to cheer for guys like that. And if you want to win, you look at all the teams that win, they've got big guys, they got big guys on the back end. They got big guys down the middle. He fits that role and as his skill set continues to get better. I think we've got ourselves a centreman that can play 10 years here or longer."

Now in the final season of his three-year, entry-level contract, Kastelic is still eligible for waivers. The Senators currently have 13 forwards signed to NHL deals, not including restricted free agent Alex Formention, who remains without a contract.

"I think to be brutally honest, if he's 28 years old right now he's on the team for sure," said Smith. "It's what's best for his long-term development, what makes him the absolute best player for the Ottawa Senators for 10 years and if we jump the gun, and we hurt his development by not giving him enough touches or whatever the case may be, that's the risk I guess you run.

"But I think confidently and it's [GM] Pierre [Dorion]'s decision, ultimately on on who's going to be here at the end, is that if he required waivers, I don't think that we'd be able to take that risk."

The Senators return to preseason action on Tuesday night against the Winnipeg Jets.