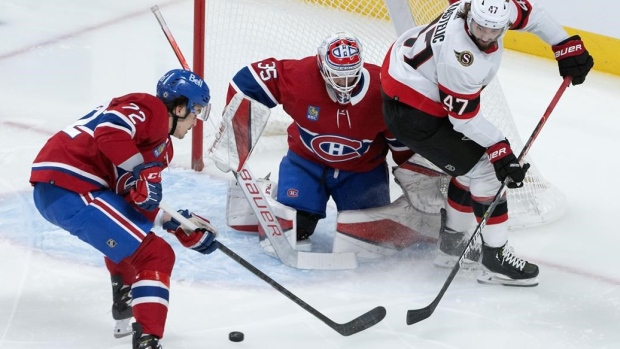 MONTREAL — The Ottawa Senators set the tone early for the first of three consecutive games against the Montreal Canadiens.

Ottawa scored three minutes into the game and handed Montreal a 5-4 loss in the final NHL pre-season contest at the Bell Centre Tuesday night.

Joel Armia and David Savard levelled the score in the second period while Cole Caufield and Arber Xhekaj scored in the third for the Habs who have lost all six of their pre-season games.

“You have to stay on the gas,” he said. You have to keep grinding and try to score without giving up anything. I just thought we were too passive and took a penalty and things happen like that but, you know what, on the road we still found a way to win.

“We want to be ready for the start of the season and I think the guys showed up tonight. Obviously it was the first game where all of us were together and I thought we did some really good things, but at the end of the day I think we worked and deserved the win.”

Forward Mathieu Joseph believed that the Senators “deserved to win” in the first game Ottawa employed a full-force squad. The native of Chambly, Que., added that “it takes time” for a team to consistently put the hammer down and impose themselves.

“It’s the first game together, kind of, and you learn as a team how to win with goals in advance, with a two-goal lead, how to pressure and when to pressure and manage the puck,” Joseph said.

“Obviously you want to do the right thing, no one tries to get scored on with four minutes left. It takes some time and you gotta get used to it, but I’m sure the guys will do whatever it takes to win.”

Nick Suzuki earned one assist in his first game as the 31st captain in Canadiens history. The centre, who played alongside Caufield and Juraj Slafkovsky, missed the start of pre-season with a lower-body injury.

“The best feeling,” Caufield said when asked about Suzuki’s return. “It's always nice having them out there. You can tell, he brought his energy right away and made a couple good plays tonight and was good all around.”

Armia and Emil Heineman left the game in the third period with upper-body injuries which meant the top line received additional minutes as the Habs tried to get back in the game. Slafkovsky ended the game with 22:24 of ice time, the most of any player on either team.

“I thought he had moments, he got some looks,” said Canadiens coach Martin St. Louis of Slafkovsky in his first experience on the top line.

“They got a lot of ice time, those guys, tonight. Obviously, we went down to 10 forwards in the third and we got into a rhythm and I really liked the way we played in the third.”

Anton Forsberg allowed four goals and made 20 saves for Ottawa, while Samuel Montembeault blocked 18 shots and conceded five goals in the Montreal net.

Just like in Monday’s 5-1 loss to the Toronto Maple Leafs, Montreal conceded early after taking a penalty. Giroux sent a cross-ice pass through the Habs’ penalty kill unit to DeBrincat who beat Montembeault with a striking one-timer.

DeBrincat returned the favour in the second period by sending a piercing pass for Giroux in front of the net to double Ottawa’s lead.

The Canadiens levelled the score with two goals in 44 seconds. Suzuki skated around two Ottawa players and sent the puck to Armia in the slot and the Finn beat Forsberg with the one-timer.

Savard instigated the play leading to his goal. The defenceman made a spin move to enter the offensive zone then received the puck from Jake Evans and scored Montreal’s second goal.

Ottawa regained their lead shortly after when Motte took a shot from the point, through traffic, that beat Montembeault over his left shoulder.

By the end of the second period, the Sens had their two-goal lead back. From behind the net, Joseph found Pinto alone in the slot and the 21-year-old buried Ottawa’s fourth marker of the night.

Montreal cut their deficit back to one on the power play when Suzuki found Caufield with a cross-ice pass. The sniper didn’t miss his one-timer opportunity.

The Sens responded by taking advantage of Kaiden Guhle’s defensive mishap. Drake Batherson and Tkachuk found themselves on a 2-on-0 and the Ottawa captain found the back of the net.

Xhekaj added a late goal to make the score 5-4, but it was too little too late for Montreal.

ICE CHIPS: The Canadiens announced after the game the team had released Owen Beck and Brendan Gignac from training camp.

This report by The Canadian Press was first published Oct. 4, 2022.