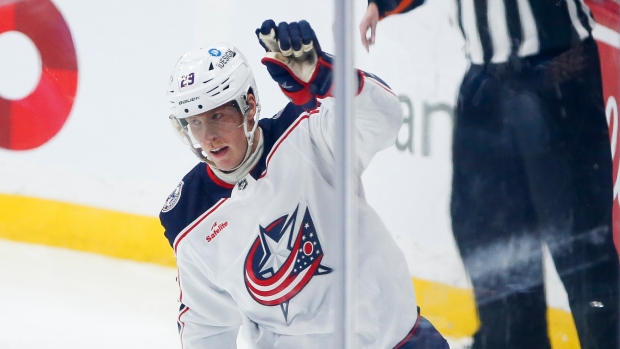 WINNIPEG — Patrik Laine had an inkling he might have a good game in his return from an ankle injury. He was right.

Laine scored twice and Johnny Gaudreau contributed a trio of assists as the Columbus Blue Jackets upset the Winnipeg Jets 4-1 on Friday.

"I can kind of feel it during the morning skate if I'm feeling good or not and I felt like I was going pretty good this morning," Laine said. "So I had good thought(s) for tonight and I feel like right off the start our line was playing good hockey."

Laine had missed the previous seven games. It was also his second game in Winnipeg since the Jets traded him to Columbus in January 2021.

Erik Gudbranson was credited with a goal after the puck went in off a Jets player. Gustav Nyquist also scored for Columbus (8-12-2), which snapped a three-game losing skid (1-2-1).

Joonas Korpisalo made 37 saves for the Blue Jackets.

Pierre-Luc Dubois scored a power-play goal for the Jets (14-7-1), who were coming off a 5-0 victory over the Colorado Avalanche and three straight wins.

David Rittich stopped 22 shots in his fifth start this season for Winnipeg, which was playing the second game of a four-game homestand.

"It wasn't our best," Jets head coach Rick Bowness said. "We had a lot of bad performances from a lot of players in that room. We did. The team game kind of went out the window at times, defensively."

It was only Winnipeg's third loss at Canada Life Centre this season (8-3-0).

Columbus led 2-0 after the first period and 4-0 following the second.

The Jets finished 1-for-5 on the power play. The Blue Jackets were 0-for-3.

"The power play could have been a difference-maker tonight and we didn't do a good job," Dubois said.

Laine opened the scoring at 6:48 of the first period after blasting a pass from Gaudreau.

Gudbranson made it 2-0 at 10:42 when his shot rebounded off Rittich, but the puck appeared to hit the skate of Dubois and go back into the net.

Laine scored again at 3:19 after a pass across the front of the crease by Jenner gave him an open side of the net for a target.

The Jets seemed to get a burst of energy during the middle of the period, but a Morgan Barron shot banged off the post and Korpisalo made a couple of quality saves.

Dubois scored at 15:30 of the third on the power play and with Rittich pulled for six attackers.

Laine was represented in the stands by some Winnipeg fans wearing his old jersey for his second game back in the city.

He started his career with the Jets in 2016-17 and played 306 regular-season games for the franchise until a trade to the Blue Jackets in January 2021 with Jack Roslovic, plus an exchange of Dubois.

Laine received a mix of boos and cheers after scoring his third goal of an injury-marred season in only his ninth game. Roslovic picked up an assist on Gudbranson’s goal.

"Yeah, well, points are points, it doesn't matter where they come, but it's a little bit special here," Laine said. "It's nice to hear the fans booing a little bit when I scored, but that's just the way it goes. It was a special, special night to get the win here."

Gaudreau's pair of assists boosted his point streak to three games. He has one goal and five assists during that span, and 16 points (three goals, 13 assists) in his past 10 games.

The former Calgary Flames star, who signed with the Blue Jackets in free agency in the off-season, has 24 points in 22 games, including eight goals.

"So I think as he starts to produce more and he builds more confidence, he could be lethal for us."

This report by The Canadian Press was first published Dec. 2, 2022.