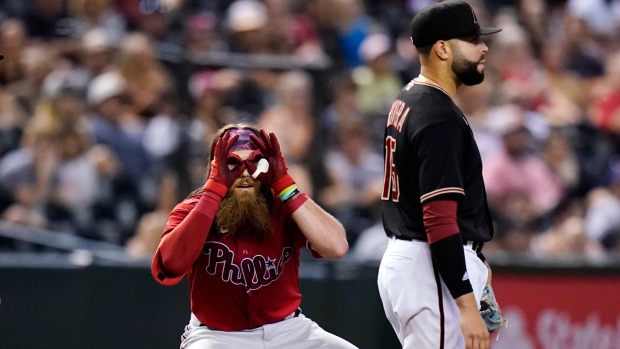 PHOENIX (AP) — The Philadelphia Phillies pounded 22 hits, scored 18 runs and did basically anything they wanted offensively in an 18-2 drubbing of the Arizona Diamondbacks on Wednesday night.

Yet surprisingly, the story was about the pitching.

Left-hander Bailey Falter threw a career-high 6 1/3 innings, giving up just one run, giving the Phillies another rotation option during the stretch run. He walked none and struck out six, carving through the D-backs lineup with ease.

“We needed a ‘W’ today and that's what we did,” Falter said. “The bats were fantastic, I went out and did my job and gave us a chance to win.”

Falter (3-3) has spent much of this season bouncing between Philadelphia and Triple-A Lehigh Valley, not necessarily because he wasn't effective in the big leagues, but because of a roster crunch that often left the 25-year-old as the odd man out.

He's making it harder to demote him to the minors these days. The Phillies are 4-0 in his last four starts.

The only blemish in Falter's night was in the seventh inning, when he left the game with right groin tightness. But interim manager Rob Thompson called the move precautionary and said he didn't believe it would cause the lefty to miss any time.

“He's done a great job,” Thompson said. “His confidence has risen, he's comfortable, his breaking ball is getting better each start and he's throwing strikes.”

Philadelphia sent 15 batters to the plate in a seven-run eighth inning. It was a nice bounce-back performance for the Phillies, who had given up 25 runs in the first two games of the series and blew a 7-0 lead in Monday’s opener.

Jake McCarthy hit a solo homer for the D-backs in the fourth. Christian Walker and Stone Garrett both had two hits.

“This was a terrible day, right?” D-backs manager Torey Lovullo said. “Brutal all the way around. You lose a game 18-2, there's not a lot of positives. ... We don't need to go over it. You guys saw it. It wasn't pretty."

D-backs shortstop Geraldo Perdomo was charged with two errors on one play in the first inning.

Perdomo bobbled a grounder to his backhand, which allowed Alec Bohm to reach first. Perdomo also had a wild throw to first, allowing Rhys Hoskins advance from second to third.

Thomas also played eight seasons in the big leagues, highlighted by an All-Star season with the Los Angeles Angels in 1962.

Phillies: Have a day off on Thursday before starting a three-game series at San Francisco. The Phillies will start RHP Kyle Gibson (9-5, 4.08 ERA) against San Francisco RHP Alex Cobb (4-6, 3.81)