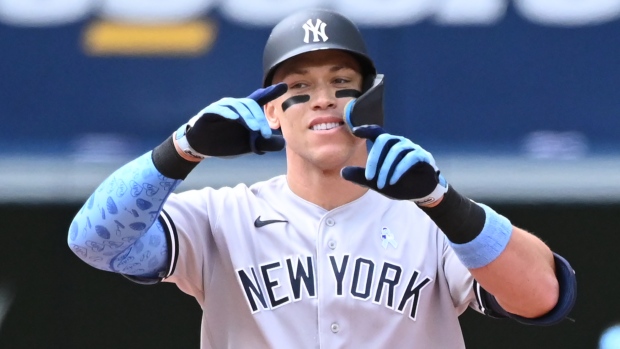 The New York Yankees got their slugger back after Aaron Judge agreed to a nine-year, $360 million deal on Wednesday morning in the biggest free-agent signing announced during  baseball's first in-person Winter Meetings since 2019.

The 6-foot-7 Judge will return to patrolling the outfield in the Bronx and will likely move forward as captain of the Yankees. The blockbuster signing is a result that seemed uncertain for most of the regular and hot stove seasons. Before the 2022 Major League Baseball season began, the Yankees had offered Judge a seven year, $213.5 million extension but the now 30-year-old politely declined, bet on himself and went on to have the greatest offensive showing in the history of baseball.

In an effort to quell judgment from their fan base, Yankees management made public the offer that Judge had turned down in the spring. The Yankees didn’t want people to think they weren’t putting their best foot forward. But in covering their own behinds, the team’s front office alienated their best player. Judge was angry and disappointed, but he channeled his bad energy into positive results.

Not only did Judge hit an American League-record 62 homers last season – surpassing Roger Maris' mark –  he also led the Yankees to an AL East title and was named AL MVP.

As Judge hit free agency, he knew there would be interest from a few teams clamouring for the California native’s services. What transpired since the end of the season was one of the greatest negotiations I have watched from afar. In the end, Judge’s camp ultimately entertained offers from the San Francisco Giants and the Yankees over the course of the last month.

At the very end of the negotiating process, the San Diego Padres tried to steal Judge and buy his allegiance away from his childhood home team (San Francisco) and from the team that helped him grow up (New York). His agents played the Giants and Yankees against each other. He got them to keep adding money and years to the deal. A Giants source shared that if the Yankees went eight years, they would go nine years. If the Yankees went nine, the Giants would go 10.  If the Yanks went 10, they would go 11. You get the point.

The Giants wanted Judge badly and knew they had to separate themselves from the Yankees in some way.

The Padres made a last-ditch effort to woo Judge to sunny California to play baseball. There were reports that the Padres had offered him 10 years and $400 million. The radio silence from Judge’s agent made the Yankees squirm. New York knew that if they lost Judge they would likely be in serious trouble. It would have taken them having to sign three or four premium players to make up for his lost production. That might have cost the team $80 million.

When Judge was close to deciding what to do about his future, reports started to leak out that the Giants were gaining momentum. At that point, Yankees owner Hal Steinbrenner reached out to No. 99 and asked him if he wanted to be a Yankee. Judge answered in the affirmative, but it was going to take the ninth year to get the deal done. Steinbrenner swallowed hard and gave his star the money.

Nine years and $360 million. Remarkable. The price had skyrocketed on the Yankees and almost beyond reach for the pinstripes. But Steinbrenner realized, finally, that he couldn’t afford not to sign Judge.

It was the right deal for both sides. They need each other. Sure, Judge and his agent got the Yankees to add $146.5 million to his contract on the way to a record deal – a $40 million per year paycheque, the highest average annual deal for an MLB position player.

But the Yankees got a below market deal. The market said the Padres would pay him $400 million over 10 years. Instead, the Yankees saved a year and $40 million. A win-win. The back-end of the deal is expected to sting as Judge is not likely to remain a $40 million-calibre-player in years 7 through 10. But if they win a championship and continue to draw fans it will be worth it.

There were so many other big deals that were completed during Winter Meetings week in San Diego. The one I like the most is the Philadelphia Phillies signing shortstop Trea Turner to an 11-year, $300 million contract. The 29-year-old shortstop is a perfect fit in Philly. He was Bryce Harper’s teammate previously in Washington and it was Harper who pushed hard for the Phillies to acquire him.

Turner improves the 2022 National League champs in so many ways. He upgrades them defensively at the position. He is the second-fastest player in baseball so he has great range which is huge considering the banning of infield shifts this upcoming season.

He is also a speedster on the bases which will lead to at least 50 stolen bases in 2023 with the bigger bases and limits on pitchers attempting pickoffs. He is also an excellent hitter and table-setter. He can leadoff and push Kyle Schwarber to the two-hole in the lineup.

Schwarber hit 46 homers last season but 31 of them were solo shots. Not this year with Turner in front of him. Turner has home run power, too, and can help replace some of the missing thump in the lineup while Harper is recovering from Tommy John surgery.

The Phillies are my biggest winner at the winter meetings because, in addition to signing Turner, they agreed to deals with starting pitcher Taijuan Walker and lefty reliever Matt Strahm. Dave Dombrowksi, the team’s president of baseball operations, continues to dazzle Phillies fans with his moves. The Philadelphia fan base is fired up there and the momentum gained by winning the NL pennant has been advanced for 2023.

My best under-the-radar move was made by the Cleveland Guardians after they agreed to a two-year deal with first baseman/designated hitter Josh Bell. The Guardians will pay Bell $33 million over the two years. Cleveland hit just 127 home runs in 2022, the second fewest in the majors. In fact, they hit exactly half as many homers as the Yankees (254) did last season. Manager of the year Terry Francona will be able to slot Bell, a switch-hitter, in the lineup right behind Jose Ramirez, another switch-hitter. Bell is a gentleman who will fit right into the high-character Guardians roster.

The deal I didn’t like was the Texas Rangers signing of ace pitcher Jacob deGrom. Sounds weird, I know. Of course, when he’s healthy the two-time Cy Young Award winners is among the best ever. But the 34-year-old former New York Mets ace only made 15 starts in 2021 and 11 starts in 2022 due to elbow and scapular injuries. The Rangers gave the right-hander a five-year, $185 million contract.

My experience as a general manager is that where there is smoke, there is fire. I know that every long-term contract can be risky, but if a player were to get hurt during his first spring training it wouldn’t be a surprise, then I can’t give him a five-year deal.

The Mets know deGrom the best and they weren’t willing to go beyond three years. In fact, the Mets will be happy that deGrom left because I believe they will get more from new signing Justin Verlander, this year’s AL Cy Young Award winner. The Mets gave the 40-year old a two-year deal for $86.66 million with a vesting option. I actually believe that Verlander will be more productive over the next five years than deGrom.

The biggest underachievers of this year’s Winter Meetings are the Los Angeles Dodgers, Chicago White Sox and Toronto Blue Jays. All three of the clubs are playoff contenders and left sunny San Diego without getting anything done. Of course, it doesn’t mean the hot stove season will remain that way as there are still plenty of good players still available and time to improve rosters.

The Blue Jays need a starting pitcher, a left-handed hitting outfielder and bullpen depth, including a lefty and a reliever with swing-and-miss stuff.

They lost out to the Mets on Verlander, unfortunately. Former Mets starter Chris Bassitt would be a great fit but it could take a four-year, $76 million deal to get him. A less expensive option could be Ross Stripling, who was very effective with the Jays last season.

In the outfield, Mets centre-fielder Brandon Nimmo would have been a perfect fit in Toronto, but the 29-year-old and the Mets agreed to an eight-year, $162 million deal on Thursday night, according to ESPN's Jeff Passan.

If the Jays had landed Nimmo, who had a .274 batting average with 16 homers and 64 RBI in New York last season, it would have resulted in the team moving George Springer to right field, with Nimmo hitting behind him in the lineup.

Now that Nimmo, the Jays’ primary left-handed hitting centre-field target, is off the board they have to shift their focus. Andrew Benintendi, Michael Brantley and Michael Conforto are other left-handed hitting outfielders who would fit in Toronto but they would have to play in right field or assume DH duties.

In the bullpen, Adam Ottovino has pitched for the Yankees and Boston Red Sox and certainly knows the AL East. He has swing-and-miss stuff and would really deepen the bullpen. Left-hander Andrew Chafin pitched well with the Detroit Tigers last season and would really help the Jays.

Jays fans, there is no reason to panic yet. The team still has money to spend and depth of talent from which to trade (catchers and prospects). I know it is hard to watch other teams make deals and improve while your team isn’t doing anything but stay tuned. Reinforcements are on the way.