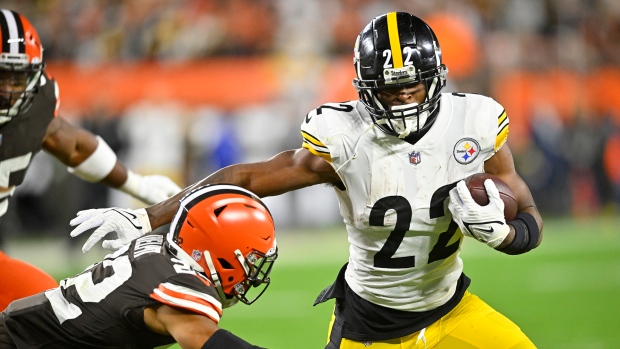 The Pittsburgh Steelers lead the Cleveland Browns 14-13 at half time on Thursday Night Football.

Mitch Trubisky led the Steelers with nine-of-thirteen passes completed for 109 yards and a one-yard touchdown run in the second quarter. Najee Harris also recorded 11 touches for 50 yards and a rushing touchdown.

Jacoby Brissett led the Browns with an efficient first half; he completed 16-of-22 passes for 134 yards and two touchdowns. Tight end David Njoku tied a career-high with seven catches for 69 yards and a touchdown.

Nick Chubb had a strong opening half, running eight times for 58 yards.

Pittsburgh claimed their first lead of the night after a 75-yard drive ended with a Trubisky touchdown on a designed run from one yard out. The converted extra point attempt gave the Steelers a 14-13 lead late in the
second quarter.

Brissett led the Browns downfield in 12 plays before capping off the long drive with a pass to Njoku in the back of the endzone for the touchdown. Cade York knocked the extra point attempt off the post.

The Steelers tied the game on the first play of the second quarter on a punishing five-yard touchdown run by Harris. George Pickens made a highlight-reel one-handed catch for 36 yards to get the visitors in the red zone.

Cleveland struck first in the opening quarter with an eight-play, 60-yard drive that featured a fourth down conversion on a Brissett sneak, a 36-yard run by Chubb and finally an 11-yard touchdown pass
from Brissett to Amari Cooper.

After their second drive ended in a three-and-out, the Browns were forced to punt. Corey Bojorquez' try was tipped by the Steelers' Miles Killebrew and travelled just 25 yards.

This allowed the Steelers to drive on a short field, but they came up short with a missed 50-yard field goal by Chris Boswell as the winds were swirling.

Each team's opening possession showcased strong defensive play, which was expected to be the narrative throughout the game. Both teams punted after less than second yards gained.