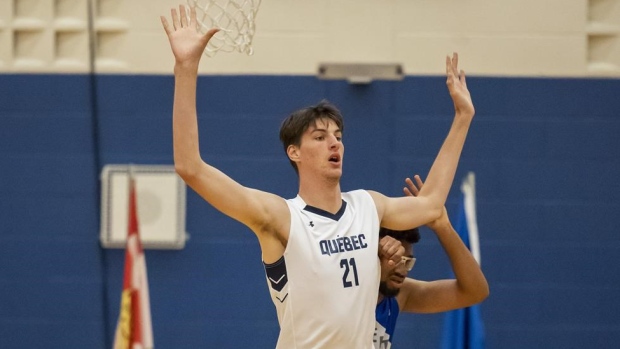 Olivier Rioux landed with a size-large exclamation point on Michael Meeks' radar when the Canada Basketball coach opened a photo in his inbox seven years ago.

Rioux was attending a kids basketball camp in Montreal, and posed for a photo alongside then-Detroit Pistons and Canadian team centre Joel Anthony, who stands a formidable six foot nine.

"Ron Yeung (Canada Basketball's manager of domestic development) sent me this photo of Olivier and Joel, and Olivier is about the same height, give or take an inch. Ron says, 'This kid is nine years old,'" said Meeks.

"I was immediately on the phones, finding out who he was and what was going on and what we can do to help."

In the years since, Rioux has sprouted to a full seven foot six. He can dunk on an NBA hoop while barely leaving his feet.

Guinness World Records recognized him as the world's tallest teenager when he was 15 and seven foot five. If he played in the NBA now, he'd be tied with Cleveland's Tacko Fall as the league's tallest player.

But Rioux is playing for Quebec at the Canada Summer Games this week in Ontario's Niagara Region with kids at least his own age, if nowhere near his size.

Quebec defeated Saskatchewan 115-78 in a consolation game on Friday after dropping a 72-70 decision to Alberta in Thursday night's quarterfinal.

Meeks, who's at the Games to keep an eye on Canada's young players, said he's seen improvement in Rioux even over the past few weeks, but cautions that like any super tall player, he's a long-term work in progress.

"People see his size and their expectations are pretty high," said Meeks. "For me, it's the little things like his mobility and agility, how he's moving, how he conceptualizes the game — how much fun is he having competing and playing?

"This is important because we're in uncharted territories with Olivier, there's never been anybody that big at that age before. So, we're kind of cautiously optimistic that he's definitely moving in the right direction."

Rioux, who's from Anjou, a borough in east Montreal, will begin Grade 10 in the fall in Bradenton, Fla. He moved there to attend IMG Academy — a school that counts superstar tennis sisters Serena and Venus Williams among its alumni — a year ago.

"It was nice," Rioux said of his first year away from home. "I was calling my parents almost every day, and the school year was good, my grades were up.

"Back in Montreal I used to go to school every day for at least eight hours. Now I go to school for three hours and practice in the afternoon, It's different," he added with a deep-voiced laugh.

He's having fun at the Games, he said, and has taken in some of the boxing competition.

He first became an unsuspecting internet star at age 12, while playing at a tournament in Spain. He stood out like a maypole among the other players on the court. It caught the eye of Golden State star Steph Curry, who tweeted: "So many questions … "

Jamal Murray posed for a photo alongside him that summer. He already towered over the Denver Nuggets star guard from Kitchener, Ont.

Joey Mckitterick, who's coached Rioux at Montreal's AAU program Brookwood Elite since he was 12, echoed Meeks in that he's seen huge improvement in Rioux this year, particularly as his growing has slowed and his co-ordination is catching up.

But perhaps most important is that Rioux is enjoying the game, which is key since huge expectations come with being super tall.

"I think this year you could see that he enjoyed everything about it, the basketball, the travelling, everything like that. He's definitely falling in love with it," Mckitterick said.

Mckitterick said part of his responsibility coaching Rioux was being a buffer between the teen and curious onlookers.

"When we travel, we could be sitting in a hotel lobby and random strangers will come up to him and ask him for a picture. It's challenging even getting through the airport to make a flight on time because people are constantly stopping him: 'Can I take your picture? Can you hold my baby?' Can you do this, can you do that?

"When I met with our players at the end of the year. I told him ‘I can't imagine being you. But the best I can do is just kind of guide you and help you and be here for you for anything you need, because I can't put myself in your position.’ Nobody could."

That uniqueness makes it difficult to gauge where basketball might take him.

"When you see Olivier, every three to six months he's doing things quicker, faster, stronger, more balanced, he's got more agility, his game is getting better, his understanding of how to impact the game is getting better," Meeks said. "This is important, because usually taller players are a little bit slower (to develop), and he's moving at the right rate in terms of a super tall player.

"Usually guys that stopped growing at about 6-3, 6-4, you could begin to see exactly what they're going to be by the time they’re 16 years old. But these tall, tall players, it's 24, 25 before it all starts coming together."

Rioux, who likes to study the games of Giannis Antetokounmpo and Nikola Jokic, who are both 6-11, is well-proportioned for his size and hasn't had any major physical issues such as sore knees that can come with fast growth.

Among other NBA giants, Gheorghe Muresan is listed as the tallest ever at seven foot seven. Yao Ming and Shawn Bradley were 7-6. Canadian Sim Bhullar was 7-5, but his weight — he was listed at 360 pounds — was a limiting factor.

Canada at least has some experience with super tall players. Zach Edey, a 20-year-old from Toronto, is seven foot four. Edey made his debut with Canada's senior men's team in a World Cup qualifier in May. The IMG Academy product is heading into his junior season for the Purdue Boilermakers, who've also expressed early interest in Rioux.

"There are a lot of Division 1 schools that are very familiar with him already," Mckitterick said. "The schools that are really focusing in on him are ones that value the size and want to use it. Because basketball has kind of gone in the direction of smaller (multi-position players), but there's still a lot of programs that still value that size."

This report by The Canadian Press was first published Aug. 12, 2022.