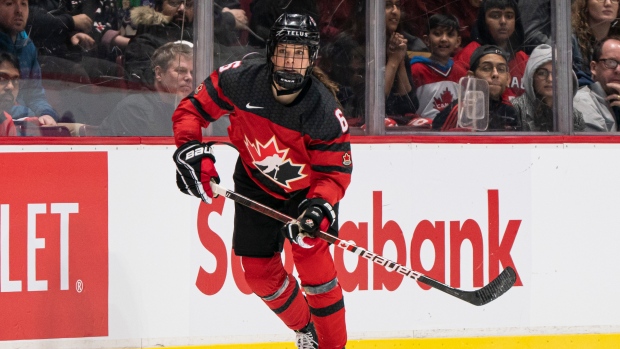 Rebecca Johnston has joined the Calgary Flames in a full-time capacity, the club announced on Tuesday.

The three-time Olympic gold medalist will work with the Flames' player development team assisting with on-ice instruction and prospect evaluation, as well as with the Flames Foundation's grassroots outreach.

We're proud to announce Rebecca Johnston will be joining the #Flames in a full-time role!

She’ll work within the player development team, assisting in prospect evaluations and on-ice instruction, and work with the @FlamesFdn in grassroots programs, growing 🏒 in our community! pic.twitter.com/4zFSbUthFu

The 32-year-old Johnston is a native of Sudbury, Ont. and a product of Cornell. She made her senior debut at the 2008 IIHF Women's World Hockey Championship in China.

For her career, Johnston has 30 goals and 42 assists in 76 Olympic and world championship games.

On top of her trio of gold medals, Johnston is a two-time world champion