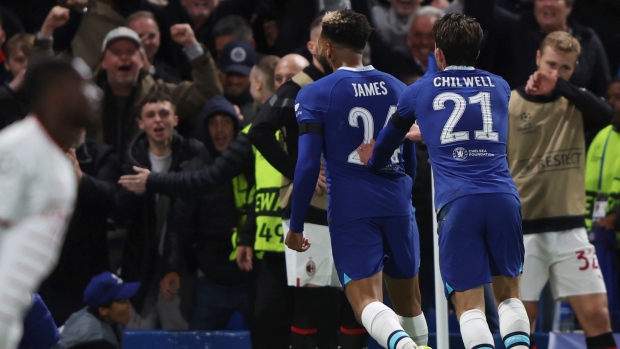 LONDON (AP) — Another goal for Pierre-Emerick Aubameyang. A first clean sheet. A comprehensive dismantling of the Italian champions in a must-win game.

The English team eased some of its early concerns in the Champions League by beating Milan 3-0 on Wednesday, with Reece James setting up Aubameyang's goal and ruthlessly dispatching another at Stamford Bridge.

Picking up just one point from its first two games had left Chelsea in a sticky position in Group E, with a double-header against Milan having the potential to plunge Potter's team into further danger.

However, Chelsea produced easily its best performance of the competition, going ahead through defender Wesley Fofana in the 24th minute with his first goal for the club since his $87 million move from Leicester in the last days of the transfer window.

Potter’s team was utterly dominant in the second half, with James crossing from the right for Aubameyang to poke in a second goal in the 56th. It was the deadline-day signing's second goal in as many games, after scoring in the win at Crystal Palace in the Premier League on Saturday.

James, the marauding right wing back, completed the scoring six minutes later with the best goal of the lot, running onto Raheem Sterling’s pass and lifting a fierce shot into the roof of the net from a narrow angle.

Chelsea’s first win of the group stage ended Milan’s unbeaten start to it and lifted the 2021 champions above the visitors by virtue of its head-to-head record.

Aside from occasional bursts of pace from Rafael Leão down the left, Milan — featuring two former Chelsea players in Olivier Giroud and Fikayo Tomori — barely troubled the hosts and will hope to put in an improved performance in front of their own fans next week at the San Siro.

The one negative for Chelsea was the sight of Fofana going off injured toward the end of the first half, having tried to play on after hurting his right knee moments earlier.

He was pictured after the match on crutches, with his knee in a brace.

Otherwise, it was another step in the right direction under Potter, who started with an underwhelming 1-1 draw at home to Salzburg in the Champions League but now has back-to-back wins after beating Palace at the weekend.

“The boys have been really open, responsible, honest and fantastic to work with," said Potter, who replaced Thomas Tuchel as manager last month. "They realized they weren’t at the levels. That’s great from a coach’s perspective.”

Milan was the architect of its own downfall at times. Fofana's goal, for example, came after three successive corners — each of which saw Thiago Silva get his head on the delivery. From the third, again the marking was poor as Thiago headed at goalkeeper Ciprian Tătăruşanu, the ball rebounded out and Fofana slotted home from seven meters out.

James' goal, meanwhile, had its origins from a poor ball out from the back by Pierre Kalulu that was intercepted. Chelsea spread the play from left to right, where James delivered a thunderous finish.

“The mood is very good at the moment,” Aubameyang said. "We’ll try to keep it up.”