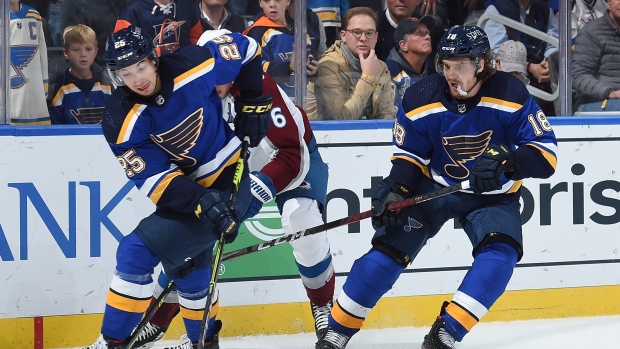 St. Louis Blues F Robert Thomas: “I had no involvement in, nor did I witness, the alleged incident.” https://t.co/Mef1FwyJo7

“I am aware of the allegations made against some of the members of the 2018 Canadian World Junior hockey team in London, Ontario in June of 2018,” Thomas wrote. “It is important for me to share with you my response to these allegations. I had no involvement in, nor did I witness, the alleged incident. I look forward to cooperating with the NHL investigation as well as any other investigation if appropriate and as required. I will not be making any further public comments at this time.”

My statement regarding the Hockey Canada investigation: pic.twitter.com/E0zPioOuOC

"As a member of the 2018 World Junior team, I am aware of the allegations made against certain members of that team. I want to clearly state I did not attend the Hockey Canada Gala and was not in London, Ontario at the time of the alleged incident. I am prepared to cooperate with any additional investigations in the future if necessary. Given the ongoing investigations, I will not provide any further public comments," Kyrou wrote.

"As a member of the 2018 World Junior team, I first became aware of the allegations made against certain members of that team back in 2019. At the time, I cooperated fully with the initial Hockey Canada investigation. I was not in any way involved in the alleged incident and I am prepared to cooperate with any additional investigations in the future. Given the ongoing investigations, I will not provide any further public comments," Raddysh's statement read.

Thomas, Kyrou and Raddysh were members of the 2018 Canadian team that captured the gold medal in Buffalo.

"Sam Steel did not engage in any of the misconduct that has been described in the media, and as far as I know, no one has alleged that he did so. Sam has cooperated with every investigation into the matter, and he intends to continue to cooperate. Both the NHL and Hockey Canada are planning to investigate further, and while that is ongoing, Sam can't comment further, so please respect that process."

Steel was also a member of the 2018 Canadian junior team and is currently an unrestricted free agent.

Hockey Canada settled a lawsuit in May after a woman, now 24, claimed she was assaulted by eight hockey players, including members of the World Junior team, at a gala and golf function in London, Ont., in June of 2018.

Last week Hockey Canada announced that it was reopening its investigation into the alleged assault and the woman involved in the case has said she will cooperate.