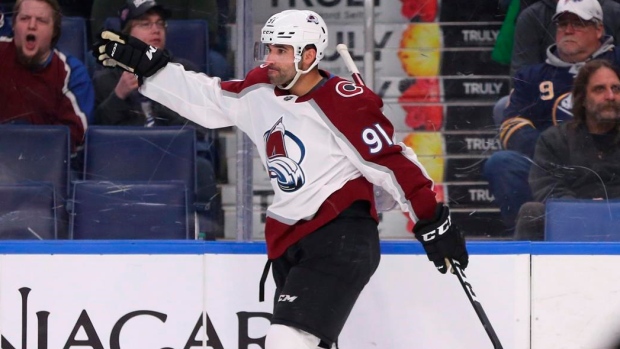 For years, as talented Calgary teams with star-laden lineups that included the likes of Johnny Gaudreau, Matthew Tkachuk, Sean Monahan, Mark Giordano and Sam Bennett continued to stumble in the postseason, Flames fans clamoured for fundamental changes to the team’s core.

This off-season, they got their wish – just, perhaps, not in the fashion they had anticipated.

Weeks after Johnny Gaudreau moved on to the Columbus Blue Jackets and Matthew Tkachuk told the organization he would not commit long-term, the Flames have now added winger Jonathan Huberdeau, blueliner Mackenzie Weegar, and, as of Thursday, centre Nazem Kadri.

Tasked with the unfathomable – replacing two 100-point stars – somehow, Calgary looks as competitive on paper as they did when they stunned the hockey world in winning the Pacific Division last season and advancing to the second round of the playoffs for the first time since 2015.

In the 31-year-old Kadri, Calgary has an ultra-competitive, two-way, gritty forward who can score, check, antagonize, and seems tailor-made for head coach Darryl Sutter’s system. Kadri, the apple of general manager Brad Treliving’s eye for several years, in 2019 turned down a trade that would have sent him to Calgary in exchange for TJ Brodie. Three years later, Kadri will don Flames colours after he was signed to a seven-year, $49-million US deal on Thursday. The contract carries an average annual value of $7 million.

“He’s a unique player…watching him over his career, he’s really developed the ability to play in all sorts of situations.”

The GM canvassed his current group, asking them what it felt like to play against Kadri. The consensus: It was tough.

Selected seventh overall by the Toronto Maple Leafs in the 2003 NHL Draft, Kadri has recorded 512 points, including 219 goals, in 739 games with the Leafs and the Colorado Avalanche. He had 87 points in 71 games (a career-high) with the Avalanche last season, winning a Stanley Cup with the team on June 26.

Calgary had the framework of a deal in place with Kadri for about a week; it was just a matter of moving out money to fit him under the salary cap. To that end, Treliving sent centre Sean Monahan to the Montreal Canadiens, along with a 2025 conditional first-round pick, whose conditions the general manager joked would make anyone fall asleep, in exchange for future considerations.

The 27-year-old Monahan leaves the Flames with a sterling reputation as a consummate professional and exemplary teammate. Treliving went out of his way several times to praise his character.

“Our team and city were fortunate to have him as a player, ambassador and member of our community,” Treliving said of Monahan, who spent his entire career with the Flames, scoring 212 goals and garnering 462 points in 656 games.

In the previous incarnation of the team, Monahan – the sixth overall pick in the 2013 NHL Draft – was the first piece in the post-Jarome Iginla era after the future Hall Of Famer was dealt at the trade deadline that year. He moves on from Calgary in the top-10 all-time in several categories.

Before luring Huberdeau, Weegar and Kadri, Treliving already had several pieces in place in Calgary: a strong back end led by Chris Tanev, an elite goalie in Jacob Markstrom, and solid depth at forward headlined by Elias Lindholm. Now, a case can be made that they are among the top teams in the Western Conference and a very real threat to break Canada’s decades-long Stanley Cup drought next spring.

When facing Edmonton’s Connor McDavid and Leon Draisaitl, or Colorado’s Nathan MacKinnon or Nashville Predator Filip Forsberg, Sutter suddenly has a bevy of options for the next postseason: he could deploy the Selke Trophy finalist Lindholm, Kadri, or Mikael Backlund. On the back end, Calgary has six capable defenders who can log heavy minutes. They may not have as much pure skill as last season’s team, but they look more prepared for the rigours of heavy spring hockey, especially given the valuable lessons learned this spring.

Treliving was asked if the team’s identity had changed given the roster turnover.

“Let’s wait until we get our team together, but I don’t think our identity has changed at all, quite frankly,” he replied.

“We’ve got really highly competitive players. Part of our identity is a team that is competitive, individually, collectively, checks hard, plays hard, hopefully can play the game any way it needs to be played.”

While the identity appears to be the same, the core has evolved – much to the delight of many Flames fans.