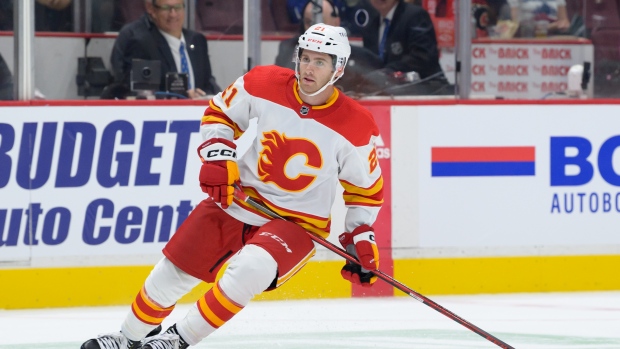 Last season, the Calgary Flames beat the New York Rangers in both games they played against the Blueshirts, outscoring them 11 to 1. Kevin Rooney, then the Rangers’ fourth-line centre, scored that lone goal. Being on the losing end of both blowouts (5-1 at Madison Square Garden and 6-0 in Calgary) made an impression on the Canton, Mass., native and in free agency this summer he chose to sign with the Flames.

“Playing against Calgary last year, I was just very impressed with the guys they have in this locker room and how hard they play every night,” he said.

“I felt like that could be a good fit for me and once free agency came around and they showed interest, I was super excited to have the opportunity to come here and play here. They have a lot of veteran guys in this locker room that are in that win-now mode and I feel like I’m in that spot as well…I’m excited to play for one of the best coaches of all time as well.”

The 29-year-old Rooney, who was not drafted, is coming off a two-season stint on Broadway where over 115 games he registered 26 points. Last season, he played mostly with Ryan Reaves and Dryden Hunt and was third among forwards in four-on-five ice time

In Rooney, Calgary has a very reliable depth centre behind Elias Lindholm, Nazem Kadri and Mikael Backlund who can kill penalties, assert himself on the forecheck, and be responsible defensively.

Initially at training camp, Rooney was skating with Milan Lucic and Trevor Lewis. Calgary has a vacancy on the right side in its top-nine, however, and moved Dillon Dube up to play with Andrew Mangiapane and Kadri, a line that has looked very good so far. Rooney was then tabbed to replace Dube on a line with Backlund and Blake Coleman, a trio that also looks like it will be tough to play against and hem opponents in their own zone.

“I’ve played centre my whole life, so I’ve always been in that spot where I’m down low and moving my feet and supporting the puck all over the ice,” he said.

“When you’re on the wing, you’re a little more up and down, stops and starts type of thing, so those are the adjustments.”

An added bonus for Rooney, who was born in the Boston area, is that he is now teammates with Lucic, one of his idols as a teenager.

“When I was in my mid-teens, it was Looch,” Rooney said, when asked of who his hockey heroes were growing up.

“It’s pretty cool to have the opportunity to play [with him].”

-Coleman and Noah Hanifin were part of the Flames’ sales pitch to land Rooney, who played with Coleman in New Jersey and called him up while Calgary was courting him. Hanifin trains with Rooney in the Boston area and also helped sell the Flames.

-General manager Brad Treliving has an interesting dilemma on his hands with a player seemingly at a crossroads. Based on training camp, it would appear Juuso Valimaki would not make the team. The Flames’ top-five on the blueline is essentially set with Hanifin, Chris Tanev, Rasmus Andersson, Nikita Zadorov, and MacKenzie Weegar, while Oliver Kylington remains away from the team. Those sixth and seventh spots come down to Nicolas Meloche, Michael Stone, Connor Mackey, and Valimaki, all of whom need waivers. Valimaki, the team’s first-round pick in 2017, would still be on the salary cap for $425,000. Prorated, that would work out to $1.87 million in accumulated cap space by the March 3, 2023, trade deadline.

While Valimaki is still young at age 24, he has yet to make a mark in the NHL (16 points in 82 games, with questions about his ability to defend and play special teams) and has a somewhat pricey contract of $1.55 million. Would Treliving have to attach a sweetener (like a draft pick or prospect) for a team to take Valimaki, with an eye of using that cap space at the deadline to add a player? Right now with Valimaki on the roster, the team is not projected to have any cap space.

-With his fine preseason, Stone has absolutely earned a fifth contract with the Flames.

-When Kylington returns (still to be determined), the Flames will have another tough decision on their hands on their blueline. Zadorov is poised for a bigger role, and head coach Darryl Sutter likes his third pairing to be big and mean. Meloche is earmarked to play that role alongside Zadorov. Calgary still needs help on the right side at forward. Kylington’s return will have a ripple effect.