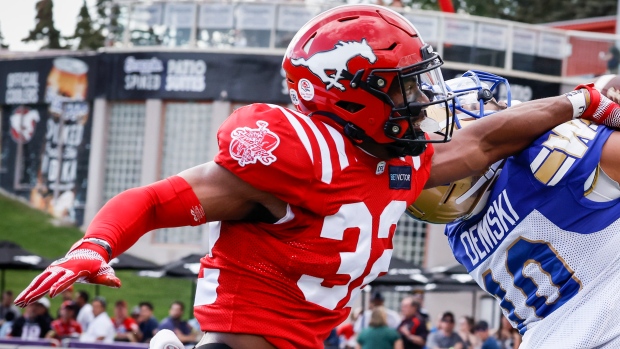 That play, according to Missouri State Bears defensive coordinator Ryan Beard epitomized why Wall was a captain on that team: leading by example, never giving up – even when the ball carrier looked like he was gone – and making the tackle.

“You see Titus flash from the other side of the screen and hunt this guy down, working as hard as he possibly could,” Beard said.

“He’s working his butt off on special teams to go save the game. He knocks the kid out of bounds. We get a stop, and it helps us win the game. That’s obviously not a highlight for the team, but he is what you embody in the culture of your team, the workman mentality, the never-quit attitude.”

Two years after that tackle, Wall is starring at defensive back for the Canadian Football League’s Calgary Stampeders. Training camp injuries to defensive backs opened up playing time, and Wall has taken full advantage.

He’s tied for the league lead with three interceptions and is the only CFLer to score touchdowns on both an interception and fumble return this season. Wall is also among the top 20 in total tackles.

Wall is garnering more attention as his strong play has continued, including being named a Player of the Week twice. Calgary teammate Jameer Thurman is leading the campaign to have Wall named as the league’s Most Outstanding Rookie come awards season.

“Since the beginning, he’s been making plays,” the Stamps linebacker said. “We understand that this is an offensive league, but as a defensive player to have two touchdowns this early in the season, that speaks volumes…interceptions, sacks, touchdowns, he’s in all phases of the game.”

Thurman, a mainstay on Calgary’s defence since his rookie season in 2017, said Wall reminds him of a younger version of himself.

“Every single day he comes to work like a professional,” Thurman said. “Nothing changes as a routine. He sticks to it, and it shows on the field.”

“He’s taken to the coaching because he’s in a tough position,” he said. “Some guys, when the opportunity hits them, they make it. We’ve had a lot of dropped interceptions this season, not from him. When he gets his chances, he makes the play.”

The Stampeders spotted Wall at an open tryout in Dallas in the spring of 2021. Defensive coordinator Brent Monson watched film of him and has been impressed with his transition to the three-down, wider-field Canadian game.

“He had a playmaking ability, a knack for the ball,” Monson said. “Also, in the workout, you could see his man coverage ability.”

“Always asking questions,” he said of Wall. “He’s always studious, communicating things he doesn’t understand and just working hard to get better at his deficiencies.”

Despite his early success in the CFL, Wall is not taking anything for granted.

“Every day is an interview,” he said. “My job is on the line…you can’t learn too much. You can always learn something every day.”

Beard and Wall still text frequently. The Stampeders linebacker has a growing fan club in his old haunts in Missouri.

“Everyone in Missouri State’s program is watching, following, and cheering for him,” Beard said.

“I give him a hard time because he had so much production here, but he didn’t have the picks and the touchdowns on defence. I said, ‘Titus, man, we really could have used those in a Bears uniform.’”