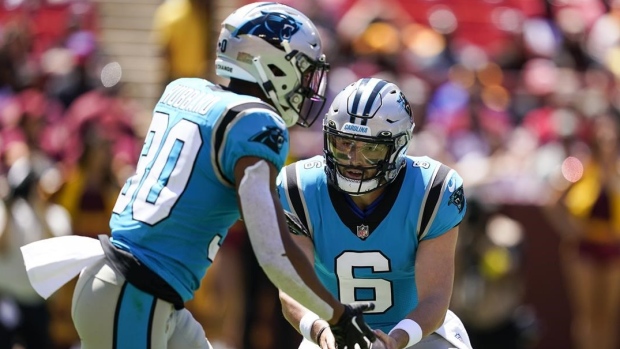 LANDOVER, Md. (AP) — Even though the Carolina Panthers are another day closer to announcing a starting quarterback before the beginning of the regular season, the first exhibition game did not do much to drastically change the status of the competition.

Sam Darnold threw a touchdown pass and Baker Mayfield was solid aside from a fumbled snap in Carolina's 23-21 preseason-opening victory Saturday at the Washington Commanders.

Even if Mayfield appears to be the favorite after the Panthers traded for him and based on training camp, neither he nor Darnold separated himself in the race that might still take some more time to be decided before Week 1, Sept. 11 against Cleveland.

“Our mentality is best suited to just put our heads down and go to work,” Mayfield said. “Just trying to improve each day, and the best man’s going to win.”

Mayfield started and completed four of seven passes for 45 yards. He scurried for 3 yards on one play and botched the exchange with center Pat Elflein just inside the red zone, contributing to the first drive stalling and ending with a field goal.

Darnold took over with Carolina in the red zone after a fumble by Washington's Antonio Gibson and completed a play-action fade pass under pressure to Rashard Higgins for an 8-yard TD. Darnold went back out for a second drive, threw incomplete on third down and finished 2 of 3 for 16 yards.

“They were both in command,” coach Matt Rhule said. “Sam got us in the end zone, Baker led us down the field, so it looked like both guys played well in terms of production. We’ll go back and look and see where they are.”

Rhule has said he doesn't want to rush into making the wrong choice.

"It’s just understanding doing everything that I can with every play that I have," Darnold said. “That’s really all I focus on when I’m out there playing.”

Mayfield and Darnold operated an offense missing running back Christian McCaffrey and wide receiver D.J. Moore, who were among the Carolina players held out. Rhule said Moore was dealing with a sore shoulder.

There's no QB competition in Washington for the first time in years, and Carson Wentz looked good in his debut for the franchise that played its first game as the Commanders.

In his first exhibition action with his third different NFL team in as many years, Wentz was 10 of 13 for 74 yards and led a 14-play, 82-yard drive that culminated in a touchdown run by rookie Brian Robinson Jr.

"It was good to get out here and not be booed and have some fun," Wentz said. “It wasn’t perfect, but it was good to kind of get our feet wet a little bit offensively.”

QBS OF THE FUTURE?

The Commanders and Panthers each had a rookie quarterback who could be part of the future get some second-half snaps. Washington's Sam Howell impressed more than Carolina's Matt Corral.

Howell, once a projected top-10 pick who fell to the fifth round after his junior season at North Carolina, took over for Taylor Heinicke early in the third quarter and was 9 of 16 for 143 yards. He also juked out a few defenders on a 17-yard touchdown run, his first of two before a 2-point-conversion that put Washington up with 2:26 left.

Corral, a third-rounder out of Mississippi, entered in the fourth quarter and was 1 of 9 for 11 yards but also led the drive that ended with Zane Gonzalez's 45-yard go-ahead field goal in the final minute.

Gibson fumbled on his second carry of the game, continuing a troubling trend that worsened last season. Gibson fumbled six times and lost the ball four of those times in 2021, his second NFL season, and his struggles to stay fully healthy led Washington to look for a running back high in the draft.

Robinson, that choice as a third-round pick out of Alabama, impressed in relief of Gibson. He rushed six times for 26 yards, including an 8-yard TD run, and caught two passes for 15 yards.

“I thought Brian kind of showed why we drafted him," coach Ron Rivera said. "He’s got that downhill physical presence on the inside.”