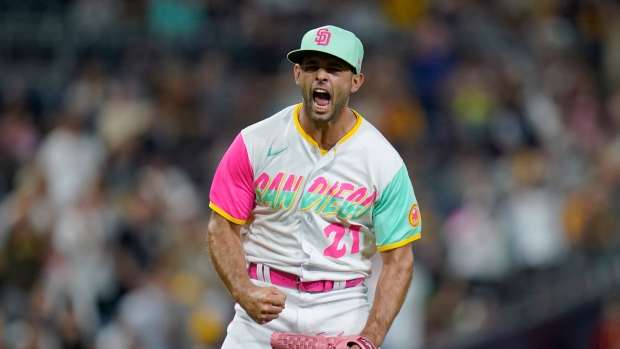 SAN DIEGO (AP) — Jake Cronenworth hit a tiebreaking, two-run homer and Mike Clevinger was brilliant for six innings as the San Diego Padres beat the Chicago White Sox 5-2 on Saturday to reduce their magic number for clinching an NL wild card to one.

Juan Soto and Manny Machado also connected for the Padres, who can claim their first playoff spot in a full season since 2006 on Sunday when they send lefty Blake Snell to the mound for the series finale. They got some help when Miami beat Milwaukee 4-3. San Diego leads Philadelphia by two games for the second of three National League wild cards.

“It feels good to get the magic number down to one,” said Clevinger, who had a great slider. "It's like a little playoff game there.”

Bob Melvin, in his first season as Padres manager, acknowledged he was scoreboard-watching during the game. Cronenworth homered right around the time the Marlins-Brewers game ended.

“Things change quickly over the course of a day,” Melvin said. “It's the great thing about this time of year is things can change in a hurry. ... A lot of good things happened to give us a little bit more confidence."

The Padres beat St. Louis in a first-round playoff series after the pandemic-shortened 2020 season before being swept in the Division Series by the eventual World Series champion Los Angeles Dodgers.

With Clevinger (7-7) and Dylan Cease (14-8) locked in a duel after each allowed a home run in the first inning, the Padres knocked the Chicago right-hander out of the game before he could get an out in the sixth.

Machado hit a leadoff single and Cronenworth followed with a homer onto the whiskey deck atop the right field wall, his 17th, for a 3-1 lead. Cronenworth raised both arms in the air and yelled, “Let's go!”

“We’re at that point in the season where every run matters,” Cronenworth said. "A home run like that is pretty big. We want to be excited in those opportunities.”

“When you have a really good starter like that you're trying to chase, one swing of the bat can be huge in a close game, and that's what it was,” Melvin said. "Croney's homer felt like more than a two-run homer at the time, based on the fact that both pitchers were pitching that well.”

Cease, in the discussion for the AL Cy Young Award, walked Brandon Drury and Josh Bell and was pulled for Joe Kelly. Austin Nola singled to bring in Drury, and Bell was thrown out trying to reach third.

Clevinger held the White Sox to one run and three hits while striking out three and walking none. After allowing Elvis Andrus' leadoff homer, Clevinger retired 16 straight batters until giving up consecutive singles with one out in the sixth. He then retired the next two batters to finish his night.

Josh Hader pitched the ninth for his 35th save.

Andrus drove Clevinger's second pitch to center field for his second career leadoff homer. It was his 15th homer this year. Andrus finished with three hits, including an RBI single in the eighth.