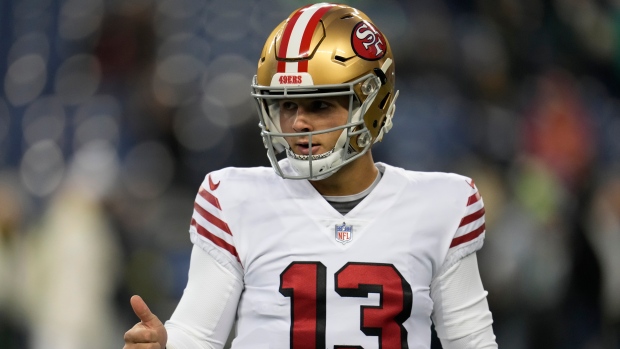 The NFL playoffs officially kick off this Saturday with an NFC West showdown between the Seattle Seahawks and San Francisco 49ers.

It might be the most lopsided of any Wild Card Weekend matchup, at least on paper.

The 13-4 49ers finished tied for the second-best record in the NFC while the Seahawks squeaked in to the postseason off a Green Bay Packers loss at 9-8 with the worst win-loss record of any non-division-winning NFC team.

The Niners won both meetings during the regular season, a 27-7 victory in Week 2 in Santa Clara and a 21-13 win in Week 15 in Seattle. Jimmy Garoppolo started under centre in their first meeting, but it was Brock Purdy who guided San Fran the second time. The last player selected in the 2022 draft, Purdy took over as 49ers starter in Week 11 after Garoppolo went down with a broken foot. The Niners haven’t lost a game since.

“I feel great. I feel like everyone else is feeling great,” the Iowa State product said. “When you’re on a roll, you’re on a win streak, you feel like the groove and how we’re playing together, it feels really good when we’re on it. I think a lot of us are real with ourselves, too, and feel like we still haven’t played to our full potential yet.”

"I felt real good about our team when we won the division there about a month ago," head coach Kyle Shanahan said. “I feel better about them now because we’ve gotten better since that point. We’ll be ready to go.”

This could come into play against the Seahawks, who allowed the fourth most yards per play (6.3) against pre-snap motion during the regular season.

One thing that could go Seattle’s way is quarterback Geno Smith’s success against zone coverage. He goes up against a 49ers defence that played zone at the third highest clip of any team.

Smith threw 13 touchdowns against zone and completed 75 per cent of his passes, both tops in the NFL. That said, he averaged 5.1 yards per attempt against the 49ers’ zone coverage in the two teams’ second meeting on Dec. 15, his third-lowest total this season.

Once again, San Francisco was impressive picking up yards after the catch this season, leading the league in that department for the sixth straight year. Christian McCaffrey (41.4) and Deebo Samuel (37.9) ranked second and third behind Los Angeles Chargers running back Austin Ekeler (48.4) in YAC per game while George Kittle (25.5) was third among tight ends.

The Seahawks struggled bringing down ball carriers after the catch, ranking second worst in the league in yards per reception (6.1).