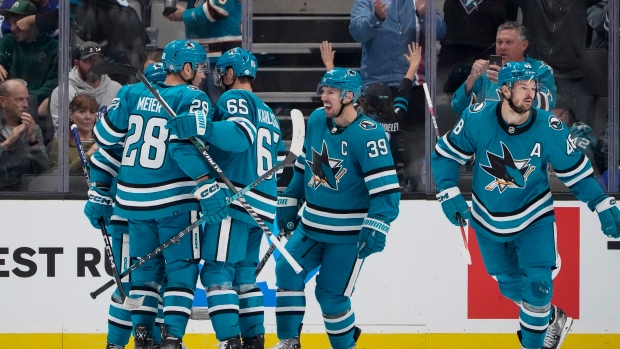 The San Jose Sharks appear to be open for business as sellers on the trade market this season.

TSN Hockey Insider Pierre LeBrun reports the Sharks may have as little as one untouchable on their roster as general manager Mike Grier looks to reshape the team.

"The Sharks have let it be known that they're willing to listen on pretty much every player on their roster other than perhaps Tomas Hertl, who just signed an eight-year extension last year," LeBrun said Thursday on Insider Trading. "Listen, Mike Grier is the new GM, he didn't take long to make significant changes last summer either and this is where he's going to need to be creative. Brent Burns only had three teams he could be traded to last summer. He actually waived to go to Carolina which wasn't one of the three teams.

"That Sharks' payroll and roster right now has a bunch of guys, led by the likes of Erik Karlsson, with full no-move clauses. It's going to be difficult for Mike Grier to enact the kind of change that he wants, but that's his intention over the next couple years."

Karlsson is the league's fourth-highest paid player, signed at a cap hit of $11.5 million through the 2026-27 season. He told The Athletic after Burns was traded that he had not requested a trade and was not looking to leave San Jose.

"No, I committed here a long time ago. It didn’t work out the way we wanted it to early on. There’s a lot of things that probably played into that. I’m not going to get into details about that," Karlsson said last month. "But I am excited for the future here now. I hope we can move in the direction to be successful again. Is that going to be this year? I mean, who knows? But I do think something good can come out of here."

The Sharks, who have missed the playoffs in each of the past three years, improved to 3-7 on the young season with Thursday's overtime win over the Toronto Maple Leafs.