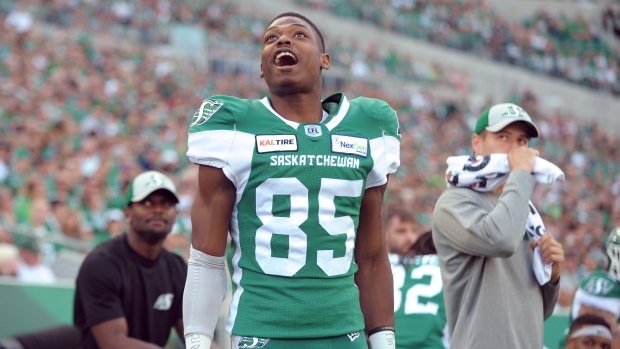 It appears the Saskatchewan Roughriders could be getting some reinforcements back to their lineup for Friday's Week 11 clash against the red-hot BC Lions.

Linebacker Pete Robertson, who has been out since July 8 with a foot sprain, and defensive lineman Garrett Marino, sidelined for the past four games due to a suspension, are both expected to return while star wide receiver Kyran Moore has been cleared to practice as he recovers from his ACL injury, according to TSN's Farhan Lalji.

With Pete Robertson and Garrett Marino scheduled to return this week, there could be more good news for #Riders: I’m told that Kyran Moore has been cleared to return from his ACL injury. Has been working on the side thus far, along with Shaq Evans. Neither practicing fully today

The 25-year-old Moore suffered the knee injury in Week 13 of the last season and hasn't been able to play since. Moore recorded 64 receptions for 585 yards and three touchdowns in 2021 before going down with the injury.

Lalji notes that the American has been working on the side with Shaq Evans, who has been out since June 23 with a fractured ankle, but did not practice fully with the team on Tuesday.

Robertson, 29, was one of the best defenders in the CFL before his injury this season, recording 11 tackles, seven sacks and three forced fumbles in just five games.

Marino, 28, was suspended four games, the longest suspension in CFL history, on July 11 for a "dangerous and reckless low hit" on Ottawa Redblacks quarterback Jeremiah Masoli and for making comments about Masoli’s heritage. Masoli was expected to miss 10-12 weeks due to the injury suffered by Marino's hit.

The Riders, who are now 5-4 on the season after beating the Edmonton Elks on Saturday to snap a three-game losing streak, host the 7-1 Lions, winners of four games in a row, on Friday at Mosaic Stadium in Regina.